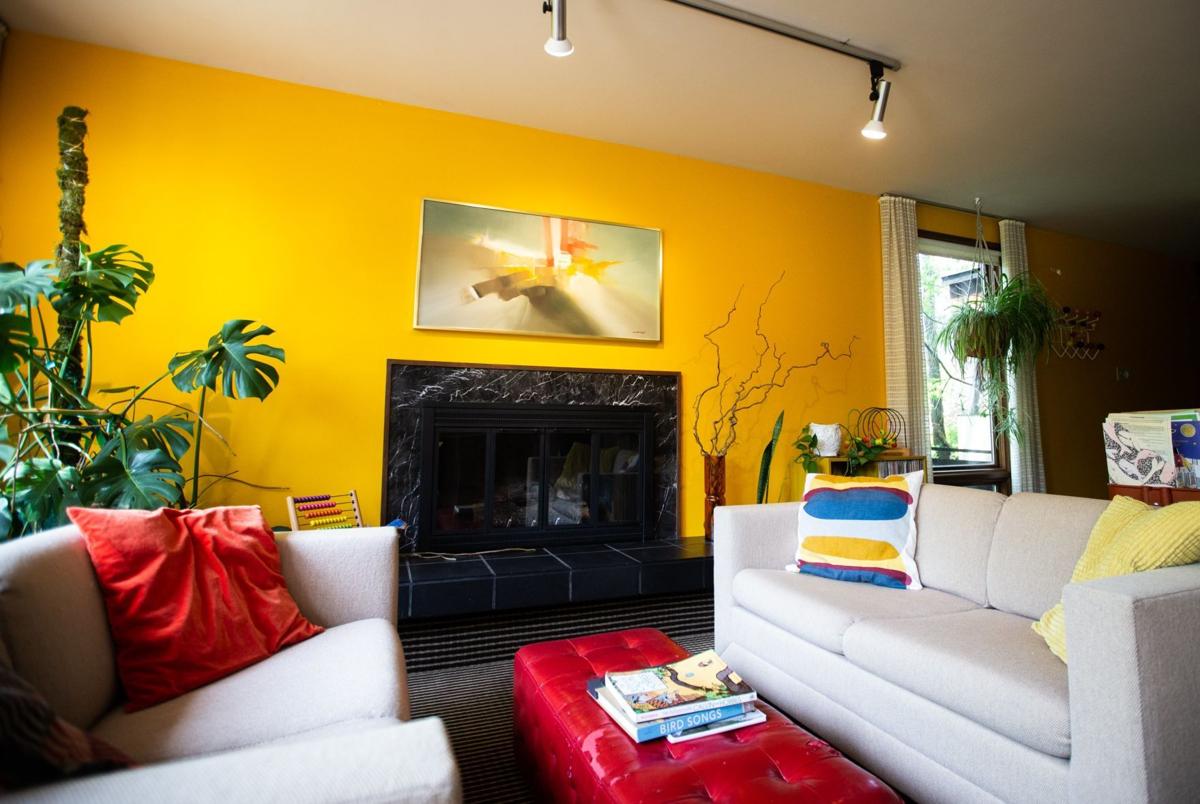 The cream tuxedo sofas were from the original owners, as is the wool carpeting in this area. The yard sale find of a shiny red ottoman/coffee table pops against an electric yellow wall in one of the family’s two living rooms. Well-placed pillows, gutsy plants, lively art and children’s toys add to the dynamic energy of the room. 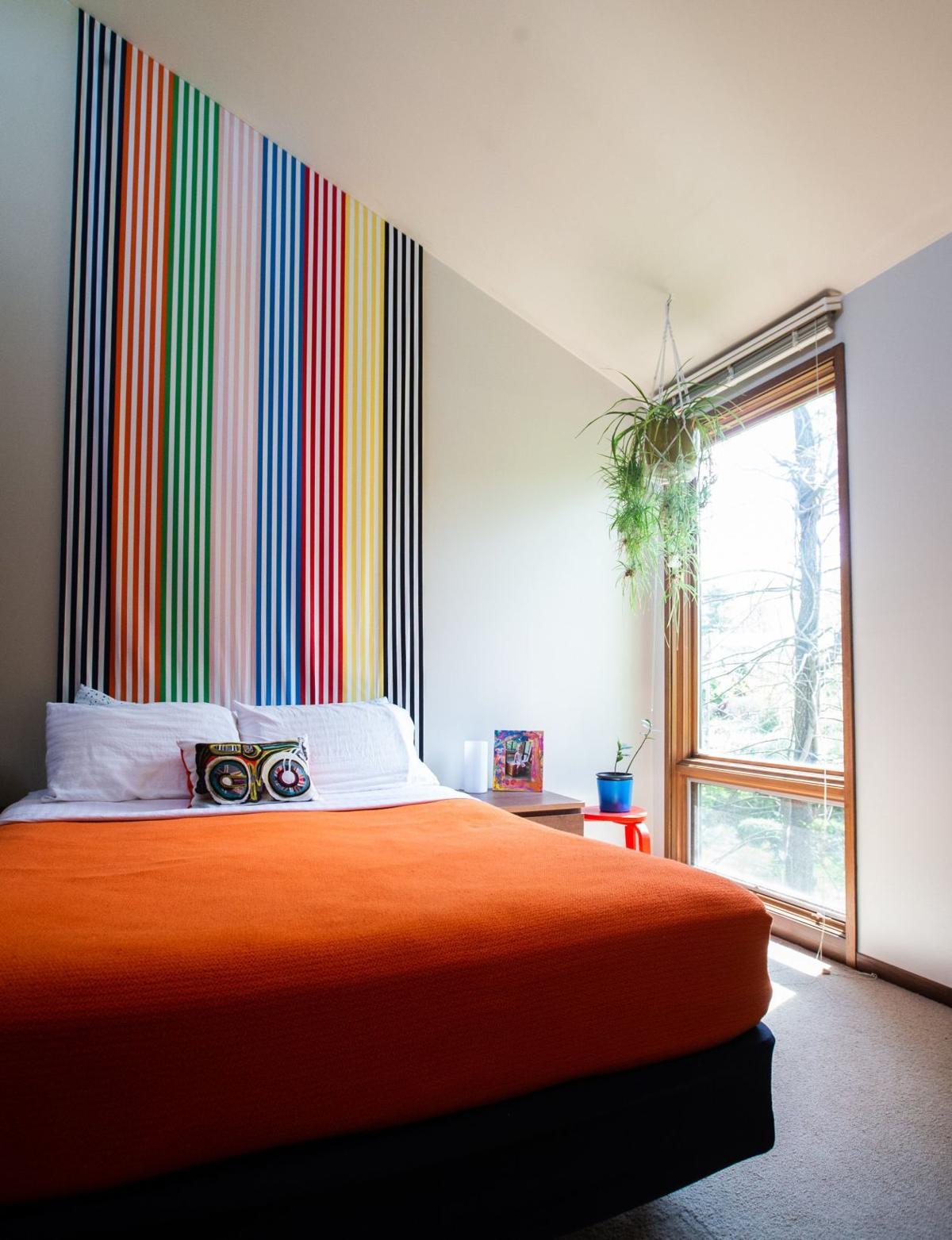 A controlled fall of Ikea fabric anchors the tailored platform bed in the master bedroom, emphasizing the home’s unusual angles and planes. 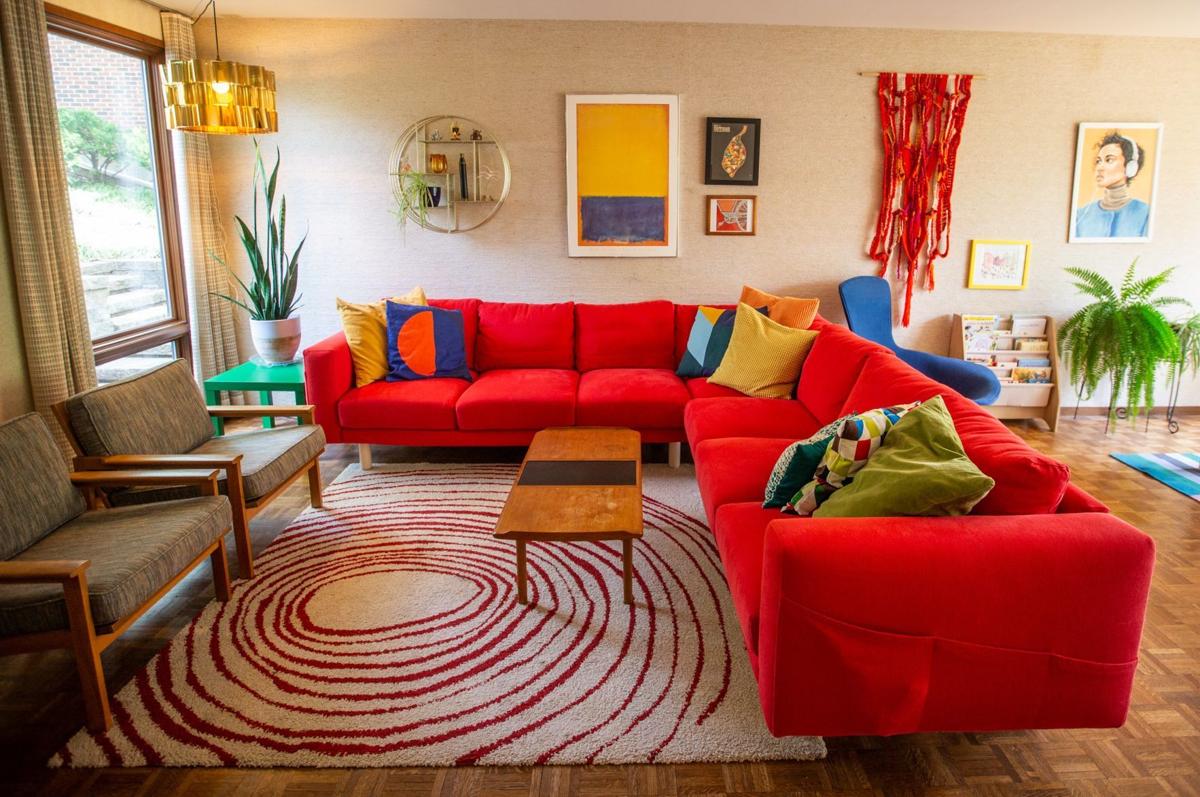 A bright red sectional anchors the second living room. A cream rug with a spiral design sits atop the original parquet floors. Wiegand and Sever repeated the circle-meets-square rhythms in their choices of a new swag lamp, pillows and art. A bright blue Harry Bertoia bird chair perches behind the sofas in daughter Elizabeth’s reading nook. 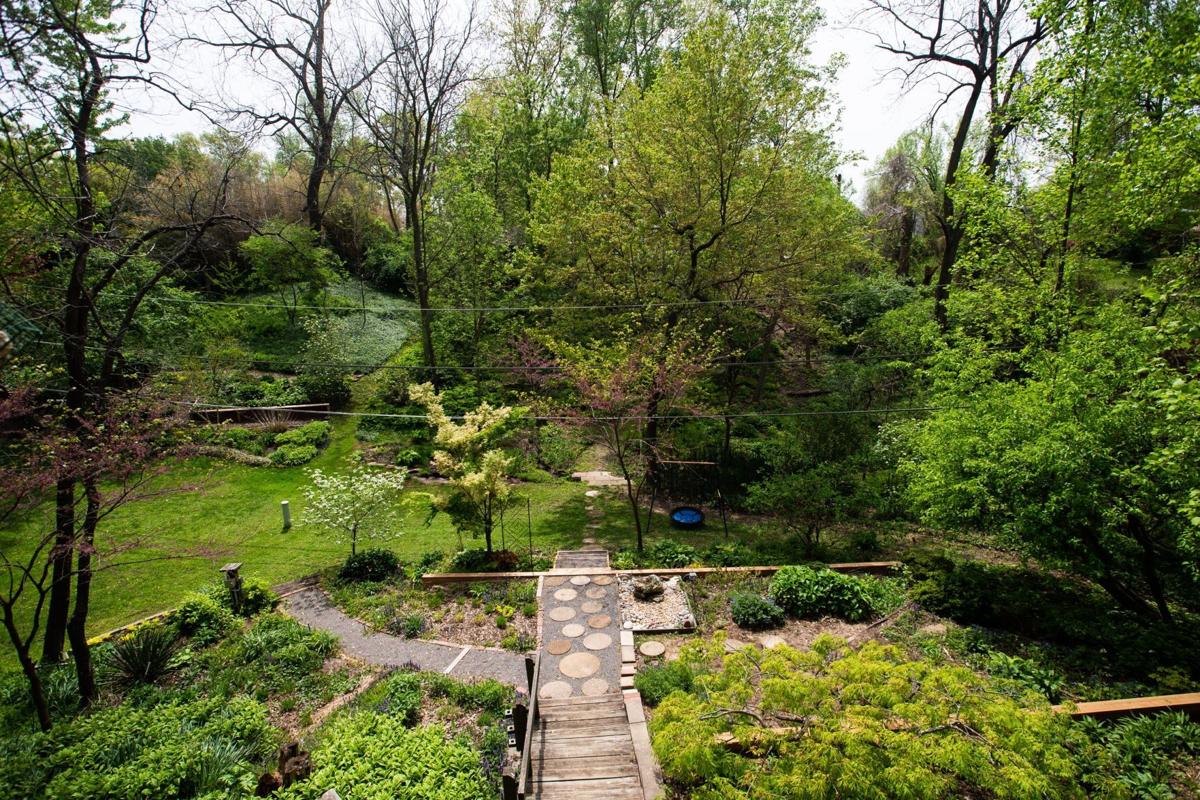 A view of the lush backyard from the back deck shows the profusion of vegetation, hardscapes, bubblers and birdbaths that attract birds and wildlife to the yard.

The kitchen cabinets reflect the original owner’s precise handling of wood throughout the home. “He even matched the grain pattern in each door, carrying it up through the transoms,” Sever says. Both Sever and Wiegand love the herringbone pattern brick floor. 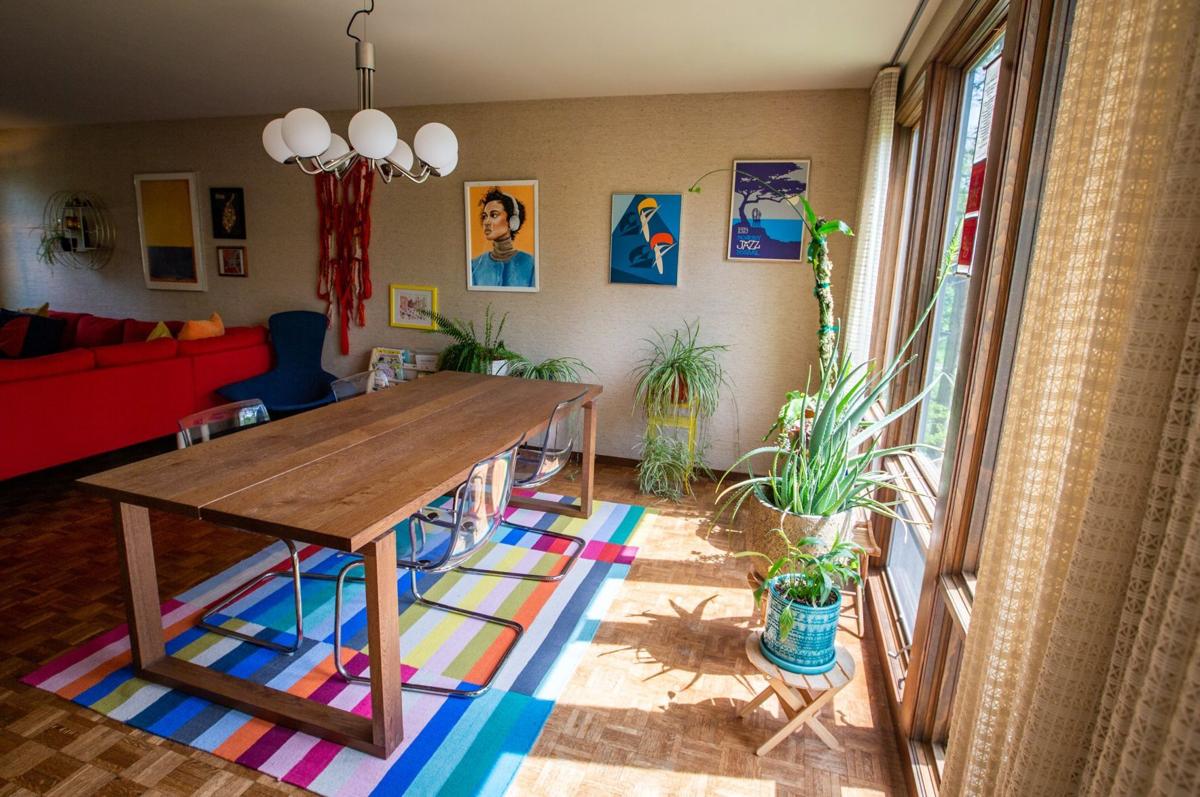 The airy style of the dining room table and chairs grounded on a patterned linear rainbow rug speaks of good times. The artworks reflect the family’s love of music and color. 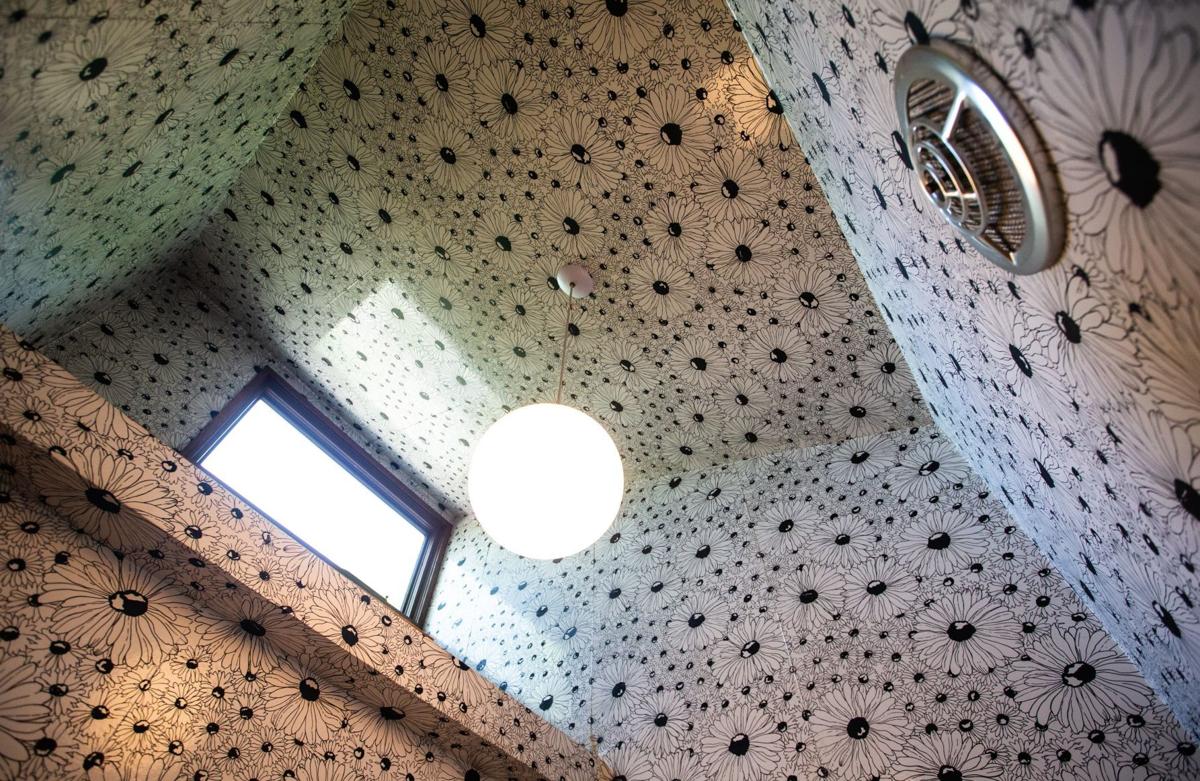 The striking geometry of angles and planes carries throughout the house as does the profusion of natural light carries. The dizzying fun of daisies wallpapering this bathroom ceiling delights both Wiegand and Sever. They also retained many of the early 1970s era light fixtures.

An old mailbox from Washington University serves as a bookshelf next to a repurposed sewing machine in Michelle Wiegand and Ben Sever’s dining roomThe painting above the shelf was passed down to the couple, while the painting on the right is by Wiegand’s brother. 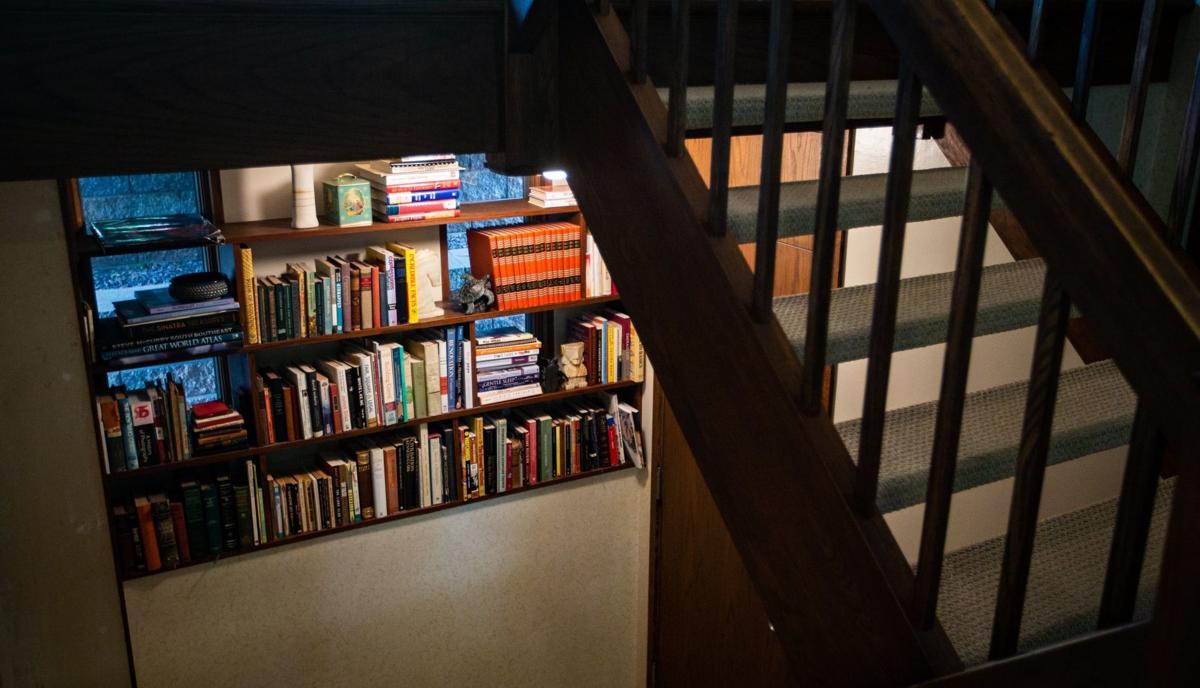 A built-in bookshelf decorates the stairwell leading to the lower level. 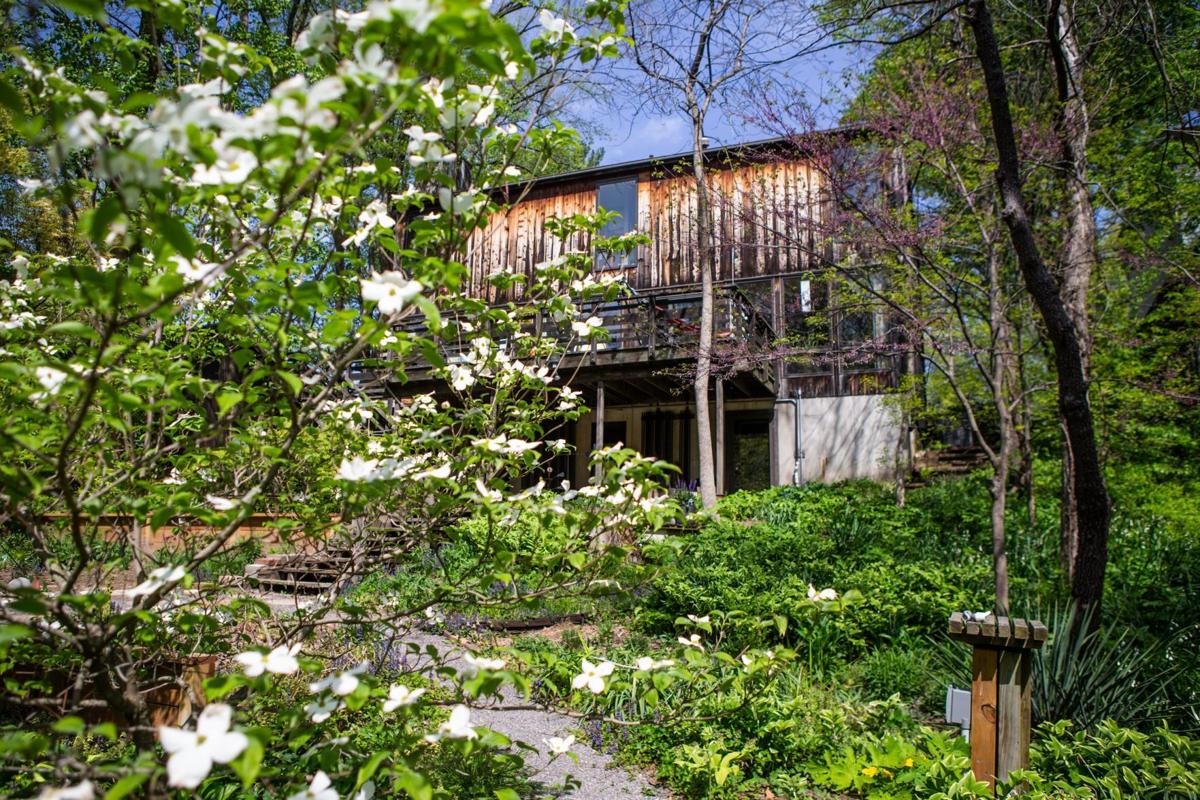 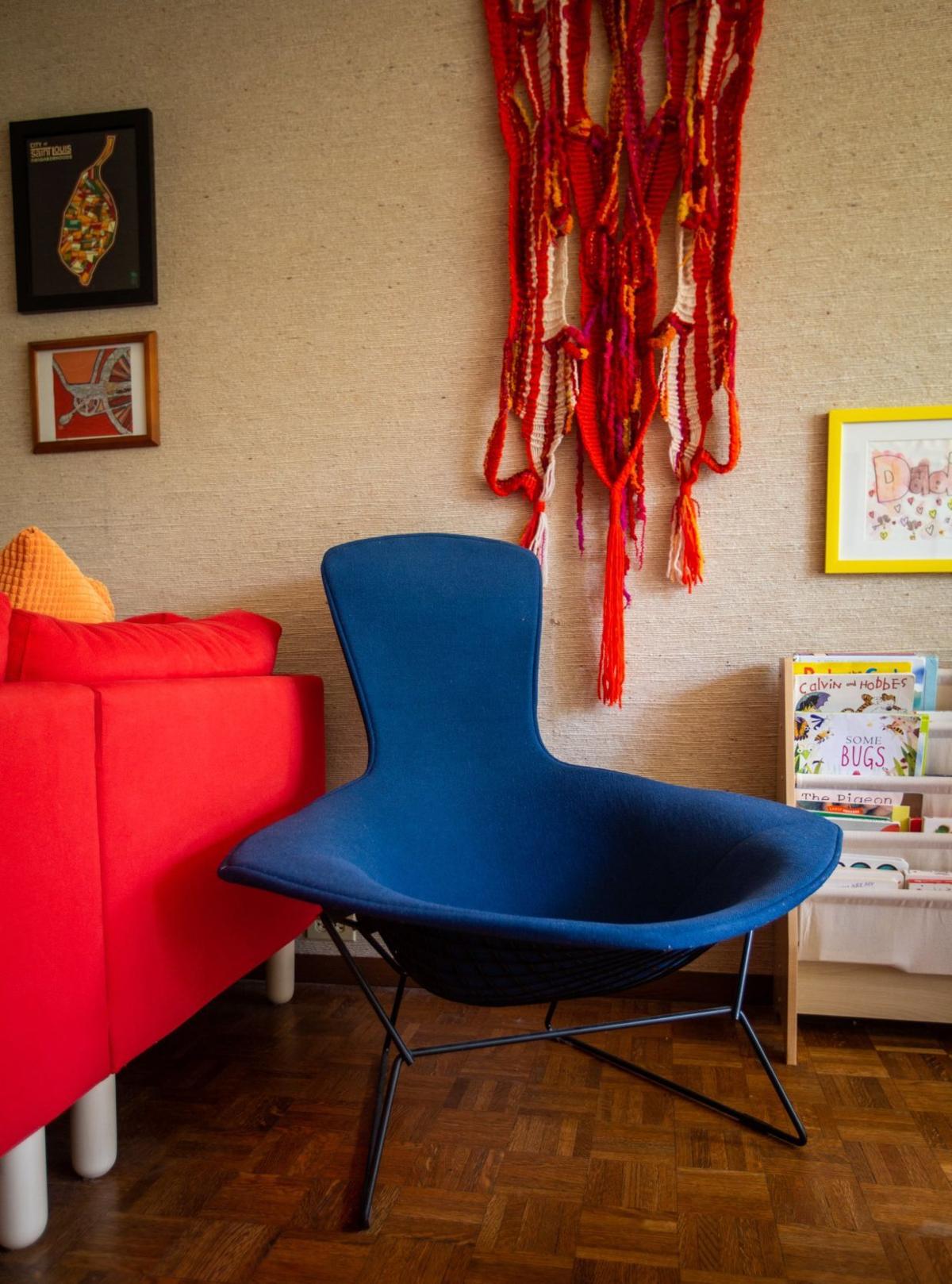 A chair from designer Harry Bertoia in the dining room of Michelle Wiegand and Ben Sever’s Ferguson home on April 27, 2021. The chair was passed down by some family friends, as it was Wiegand’s favorite when she was a child. Photo by Sara Diggins, [email protected]

By Pat Eby Special to the Post-Dispatch

Five years ago when Michelle Wiegand was pregnant with their daughter, she and husband Ben Sever decided to look for a home.

One requirement was important to both: They wanted their daughter “to be in a place where she could get dirty and play with bugs.”

The two took a studied approach. “We had a list of what we wanted in a house,” Sever says. They never expected the wild geometry of the 1970s cedar-sided home they found in Ferguson. “It didn’t match everything on our list, but we fell in love.”

“I remember sitting opposite our real estate agent on the beige couches,” Wiegand says. “She was talking to us, but we were looking out and I thought ‘I really don’t know what she’s saying.’”

“She could have been one of those Charlie Brown adults — WAH-WAH-WAH-WAH-WAH. We were starry-eyed,” Sever says. “We pretty quickly threw that list out the window.”

They moved in and got to work — thoughtfully. They preserved the best, fixed what was needed, and put their personal stamp on it.

Wiegand and Sever didn’t sweep away the 1970s design ethos that encompassed radical experimentation with form, materials, light and the back-to-nature integration of homes with the natural world.

The interiors of the period mirrored the playfulness of the era with Kool-Aid colors, interesting art and textiles, and an individualistic approach to designing a home to reflect its inhabitants, a concept the couple also adopted. Wiegand and Sever brought the 1970s house firmly into the future without losing its past.