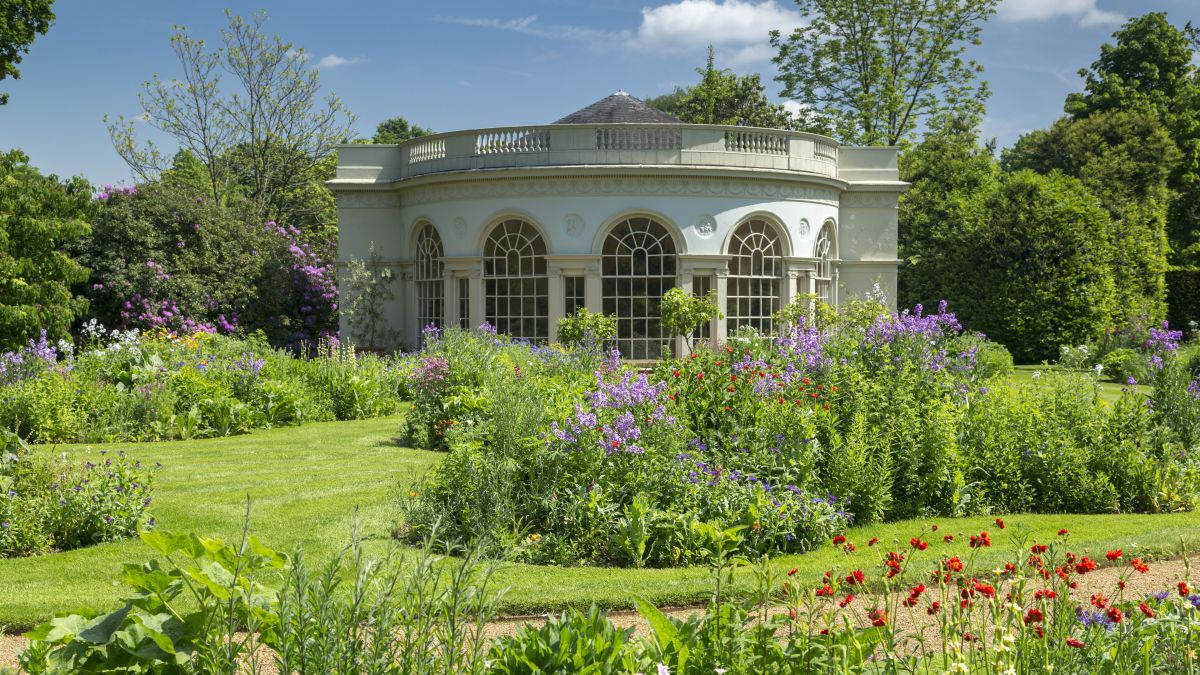 When you think of Georgian garden design it often brings to mind visions of large, grand open spaces, complementing even grander houses – perhaps seen in the great British country houses, or on Netflix’s Bridgerton.

It might feel challenging to successfully transfer ideas used on such a grand scale to a more modest domestic garden; however, there are plenty of design and planting ideas you can take from this era and apply in a backyard today – whatever its size.

Follow this advice from National Trust gardeners on how to take inspiration from Georgian gardens and incorporate some of the key features and planting styles into the garden ideas for your modern backyard.

Georgian garden design – for any size of garden

‘Georgian garden landscapes used nature as a guide, with the aim to provide new vistas and views at every turn, so that a visitor was constantly delighted by the garden’s variety,’ explains Rosie Fyles, head gardener at the National Trust.

That doesn’t mean you need a large outdoor space to get the look – the design elements below can be incorporated into small garden ideas just as successfully.

‘The layout and features of a Georgian garden are guided by simplicity, nature and pleasure,’ explains Rosie.

However, although there appears to be a natural simplicity of the Georgian garden, that is in fact artificial, explains Katherine Alker, who looks after the magnificent landscape garden of Croome, which was created by Lancelot ‘Capability’ Brown ands has been described as ‘one of the most innovative designed landscapes in Britain’.

‘Georgian landscapes were highly man-made, but they re-created natural features. Simple flower bed ideas  or garden path ideas a home gardener could apply is to use curves and serpentine shapes. You don’t need to have straight edges to your borders and paths; curves and contours will give a more natural look,’ she says.

Serpentine pathways running through a garden, rather than straight routes lend the design a more natural and simple feel and lead the eye through the landscape.

‘A pool or water feature can add an extra layer to the atmosphere of your home garden,’ explains Rosie.

‘Capability Brown created many curving, serpentine lakes, often with a clump or island of trees at one end, to give the impression that the lake went on forever,’ says Katherine.

‘You could use a similar trick of perspective with a garden pond that is wider from the viewpoint of your house window, then tapers away with planting concealing the endpoint,’ she suggests.

Shrubberies were much loved by Georgian gardeners. ‘There was an “mania” for American flowering shrubs and conifers in a Georgian garden,’ says Andy Eddy, head gardener at Osterley Park and House, and an expert on Georgian planting and plants.

‘Inspired by the plants reaching the UK from the US eastern seaboard, many of them holding the species name ‘virginia’, Georgian gardeners could extend interest right through fall with the colors these shrubs and trees added,’ explains Rosie.

‘At home you can do this with some choice plants that give interest in fall. Choosing the Carolina silverbell, Halesia carolina, would give you spring, as well as fall color, as would Sassafras albidum or Halesia monticola.’

Enjoy interest in your garden through winter, too, by including some of the best evergreen shrubs.

‘Our evergreen shrubbery at Croome gives winter interest and is relatively low maintenance. Try creating an interesting bed with just evergreens – and it doesn’t have to be all conifers – to give different textures and moods, and make more colorful parts of the garden feel all the brighter,’ advises Katherine.

If you are impatient to create interest in your garden, some of the best fast growing shrubs will soon fill it with color and texture.

4. Mix in productive plants with ornamentals

‘Georgian gardeners were thrifty and resourceful – they might have pretty flowers in their gardens but there would be many useful plants, too,’ says Rosie.

For instance William Wordsworth’s garden is packed with 18th-century varieties of vegetables, fruit, herbs and flowers. Gardener Amanda Thackeray explains that in town gardens of the period, people would have interplanted ornamental plants, shrubs and roses with productive plants like herbs.

Planting in garden beds and borders was informal and naturalistic, with an emphasis  on perennials and biennials.

‘They were fond of plants with multiple uses. Good King Henry – Chenopodium bonus-henricus –  also known as poor man’s asparagus, was used as a dye, to fatten hens, and the young stalks were eaten like broccoli,’ says Amanda.

You can follow this lead by looking for pollen-rich aromatic herbs such as catmint, lavender and herbs like golden marjoram, which look beautiful and authentic, plus will also help encourage bumblebees and butterflies as a wildlife garden idea.

‘Georgian gardeners were keen on some of the best fruit trees, especially apples. To maximize space in your backyard, try growing an espalier against a wall,’ says Rosie.

In terms of rose garden ideas, old-fashioned scented varieties would make a good, sympathetic choice. Or, for an authentic feel but with the advantages of modern plant breeding –such as disease resistance – choose a repeat-flowering shrub rose.

5. Use features and planting to frame garden views

‘Georgian garden design tends to avoid the use of physical barriers where possible, such as walls or fences, to give uninterrupted views,’ explains Rosie.

Plants and features are used to frame garden views, screening and drawing the eye to a specific focal point.

You can recreate this idea on a smaller scale in an urban garden by making use of borrowed views. ‘If there is an interesting tree in a neighbour’s backyard, for instance, consider a lower fast growing hedge or lower planting to extend your view and avoid an abrupt “end” to your own garden,’ suggests Katherine.

‘Eyecatchers’ – something artificial placed in the landscape as a focal point to catch the eye – are often used in Georgian garden design. Such as here at Kedleston, where a glimpse of an urn, partially obscured by planting, encourages you to look around the landscape.

‘An eyecatcher can be more modest. The same could be done with an object such as a bird-table or a small seating area,’ says Rosie.

What is a Georgian garden?

A Georgian garden can vary from the grand, open landscapes with many vistas such as those designed in the 18th century by Lancelot ‘Capability’ Brown, to compact town gardens, such as Mompesson, which is looked after in a Georgian style.

There are different styles of Georgian gardens, but there are certain elements they would have had.

‘Much like gardeners today, Georgian “hands on” gardeners tried different and new things. They were excited about introducing new plants; straight lines were curved; materials including brick and stone were re-used and re-purposed; lawns were labor intensive so were small, or perhaps there was none at all; they borrowed views and looked beyond their boundaries, and planting was mixed,’ explains Rosie.

If you want to recreate a Georgian garden style garden, ‘while you might decide to have defined borders, even in a more formal shape, try making the planting within them informal and naturalistic,’ explains Colin Hayman, gardener at Mompesson.

‘Experiment with the plants you choose, first creating a framework of perennials and then interplanting more freely. I doubt annual bedding was used,’ adds Colin. ‘There would have been an emphasis on perennials and biennials, with people saving seed and learning how to take rose cuttings and the like and growing from cuttings.’