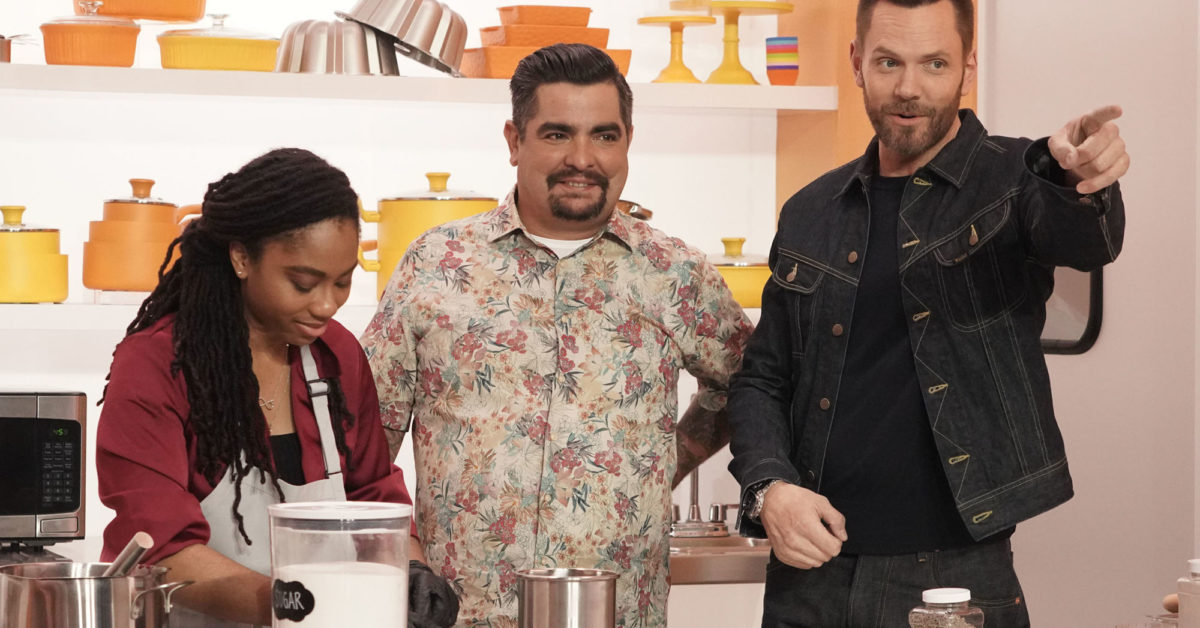 This week in FOX’s Crime Scene Kitchen, it’s a 4th of July spectacular with pies and special guest judge Aarón Sánchez from MasterChef. He joins host Joel McHale and regular judges Yolanda Gampp and Curtis Stone for the dessert round in the Crime Scene Kitchen. The last episode with this group saw Rebecca & Jean eliminated, leaving the remaining four teams to fight for a place in the semi-finals this week.

In the first round, everyone made pies as the mystery kitchen dessert, albeit different types. Emma & Leslie went with a lattice top blueberry pie; Donte & Cory made a traditional apple pie since it is the 4th of July episode. Shania & Hope interpreted the oats and brown sugar as clues to a blackberry crumble pie. Lorie & Jason also made a berry pie, though a mixed berry lattice top pie, owing to the pastry wheel in the drying rack.

Since the mystery kitchen dessert was a lattice crust blueberry pie, Emma & Leslie won the round and the extra clue going into the semi-finals next week when the two groups merge.

For the main Showstopper round, bakers are given the clues of two different size cake pans, red, white, and blue fondant, velvet cake ingredients, and a selection of three monuments celebrating America’s independence. Both Lorie & Jason and Emma & Leslie made red, white, and blue colored velvet cake in two tiers with red, white, and blue flag-themed fondant decoration; the only difference is that Lorie & Jason made the Statue of Liberty’s torch as a topper while Emma & Leslie got the extra clue that either the Statue of Liberty or the Liberty Bell were on top and went with the Liberty Bell, owing to Yolanda’s verbal clue at the start that the main component of this showstopper was made in England. Since the Liberty Bell was originally cast in England, Shania & Hope also topped their patriotic cake with a Liberty Bell topper, but they made a sponge cake, the same as Donte & Cory.

The proper patriotic cake was a two-tiered three-layer cake consisting of red and blue velvet cakes with a white cake layer between them. The cake is decorated with a fondant flag design, which means red and white stripes on the bottom tier and blue with white stars and sashes on the top tier, all tied together with a modeling chocolate Liberty Bell on top.

Since no team made the colored layers as velvet cake and the white layer as sponge cake, there is no top dessert detective team this week in the Crime Scene Kitchen. Sadly, Shania & Hope’s over-ambitious six-tier sloppy melted cake mess sent them home, but that means that next week the other three teams join the other group in the semi-finals.

BCTV Daily Dispatch: For a look at what’s going on across the television and streaming landscape, sign up for Bleeding Cool’s daily email round-up of the news you need to know here.