The plumber looks at my shower and bursts out laughing. “I’m not laughing at your shower,” he says “but that thing belongs in a museum.” Our Supajet shower was installed in 1991. Fifteen years later, the motor broke. We had a replacement motor fitted and it went on to work until 2021.

espect to Supajet. They probably put themselves out of business by making indestructible showers. Now, the plumber inspects the spaghetti junction of copper piping behind the wall. It totally cracks him up.

By this stage, I can’t stop laughing either. Eventually, the plumber suggests installing a Smart Thermo shower (€600 from Tilestyle).

It’s designed for less archaic plumbing than ours, but he can put in a motor behind the wall. I like this solution because there’s no need for retiling. We’ll also replace the Psycho shower curtain with a glass screen (€240 also from Tilestyle).

Finally, he inspects the enamelled bath and heavy Victorian ceramic sink and loo. Would I not just take it all out and get a new bathroom? I tell him that I probably would replace the bathroom if I had the money.

An old-school bathroom uses a murderous amount of water and a new one would doubtless be greener. Then again, removing and recycling a bathroom creates a carbon footprint of its own, as would the process of manufacturing a new one.

I put this to Richard Sloan, managing director of Sonas Bathrooms. “Here’s the thing,” he says. “Bathrooms have a long lifecycle. It’s a very durable product. When a bathroom is designed and installed correctly, it should last for fifteen to twenty years.

“If yours is functioning perfectly and you’ve no desire for a different aesthetic, then there’s no real reason to change it.”

That said, an old toilet is thirsty beast. Mine probably uses nine litres per flush. A contemporary dual flush loo would use either six or four litres depending on which button you press.

“The statistics show 30pc of our domestic water goes down the toilet,” Sloan says. “It’s by far the biggest consumer of water in the home.” Unfortunately, there’s no easy eco-friendly way to get rid of a redundant crapper.

“They’re made of vitreous china and they often end up in a skip on their way to landfill. There’s currently no solution to the problem of recycling ceramics. We’re exploring it currently — how to dispose of these products in a manageable way.”

Bathroom with Palm Springs wallpaper from Mind the Gap

Bathroom with Palm Springs wallpaper from Mind the Gap

It’s possible that the upcyclers have the answer. Old ceramic toilets can make convincing planters. I shit you not.

Should you choose to replace a bathroom (rather than patch up the old one), Sloan estimates that you’ll need to spend around €10,000.

Of this, about €4,000 would typically be spent on products — toilet, washbasin, shower, storage units and tiling — and the remaining €6,000 on labour. “That would be a safe estimate,” he says.

“The cost of remodelling a bathroom has risen by about 20 pc in the last few months. Installing a bathroom requires a lot of work. You’d normally need a plumber, a tiler and an electrician.”

Bathroom from Charlton Island with wallpaper by Catherine Rowe Designs

Bathroom from Charlton Island with wallpaper by Catherine Rowe Designs

The entire process should take about a week, but expect delays. “There’s a capacity crunch with good tradespeople at the moment.”

Those who are really good at DIY, or talented at shopping around for salvage and seconds, could bring the cost down considerably. Conversely, luxury products will push the price in the opposite direction.

Amid all the practical considerations, Sloan also points out that a good bathroom is so much more than a functional space.

“It’s also a place for relaxation and reflection,” he says. “All that good stuff.” A bathroom is a place of contemplation and the last bastion of solitude in the contemporary home.

“We have a young family and we try to be always available. In our house, the bathroom is the only room in the house where you’re allowed to lock the door.”

Sonas Bathrooms is the sponsor of the Bathroom Design of the Year competition, held in association with the Interiors Association of Ireland.

The competition is open to Honours Bachelor of Arts Degree in Interior Design at T-UD (Technological University Dublin), who compete to design a luxury hotel bathroom using Sonas products.

They submit a CAD rendering of their design and the winning bathroom is built as a real-life model, to be displayed at various Sonas exhibitions, including the Ideal Homes Show.

The winner of the 2022 competition was Christian Tamayo from Bray, Co Wicklow, who designed a Japandi-style bathroom with fluted green tiling that gives the impression of rippling waves, panels in natural wood, and twin black Avanti toilets (€525 each).

The dual Avanti washbasins (€345 each) are also in matt black, which echoes the Astrid round black mirror (€525 each) one over each sink, and the Harrow black basin tap (€125 each) and bath-shower mixer (€595). The Andrea free standing bath is white and costs €1,695.

All of these are supplied by Sonas and sold by various retailers around the country, where prices may vary. “My main goal was to create a homelike space,” Tamayo says.

“I felt that adding the colour green gave the sense of a connection to nature.” The matt black sanitary ware gives definition to the design, in the way that a black frame can define an artwork.

Adjacent toilets, with only a bog-roll dispenser between them, could be very practical for families with small children but may be a tad too intimate for most Irish adults.

The judging panel included Jackie Carton, President of the Interiors Association of Ireland. “Christian created a place you would like to be in,” she says.

“His bathroom was the perfect fusion between design and commerciality and his use of light and texture was exemplary. The link to biophilia — the green colour and natural wood — made this a very contemporary bathroom.”

The other winners were Caoimhe Murphy and Alva Mulreany, both in their third year at TU-D.

Caoimhe Murphy’s design was placed second in the competition

Caoimhe Murphy’s design was placed second in the competition

Murphys’ design also features a black sink and toilet; Mulreany’s includes a freestanding oval black bath. Matt black sanitary ware is clearly the way of the future. All three designs were praised by the judges for their practicality.

“There’s not an infinite potential in what you can do with a bathroom,” Sloan commented.

“These designs are a very efficient use of space. You can see how you could deliver them in a real world environment.”

See sonasbathrooms.com, tilestyle.ie, theinteriorsassociation.ie, and idealhome.ie. The Ideal Homes Show takes place at the RDS, Simmonscourt, Dublin from 1 to 3 April 2022. 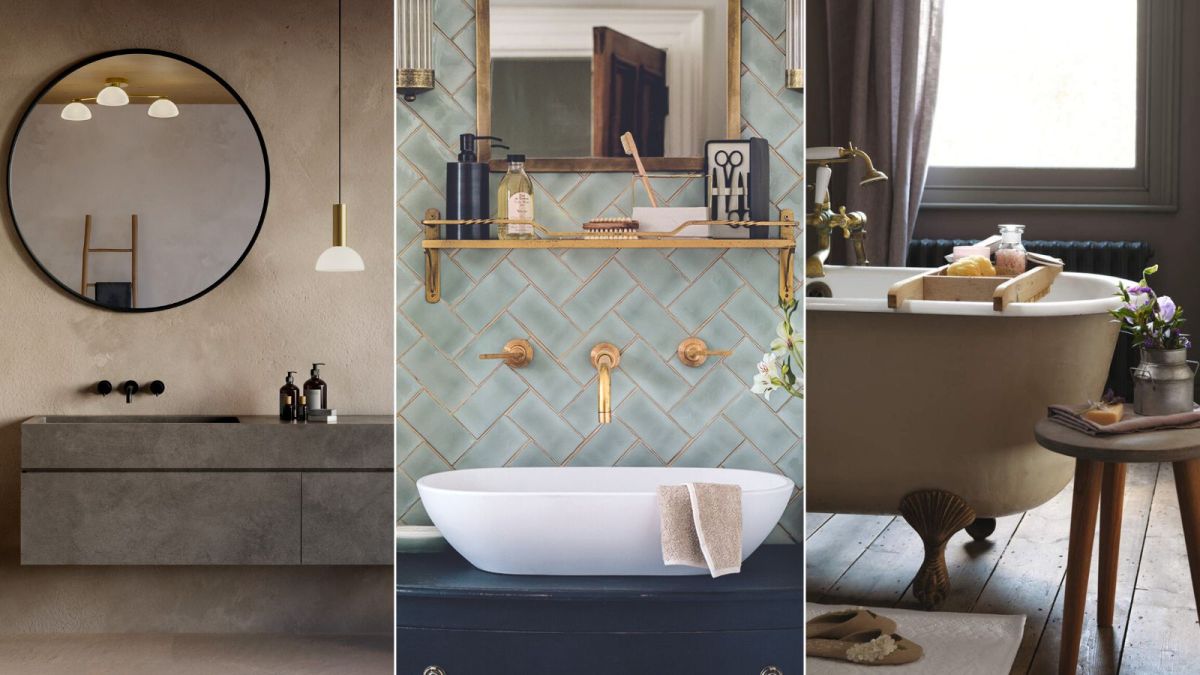 Bathroom design mistakes: and 7 ways to change them

16 Modern Bathroom Ideas to Recreate In Your Own Home