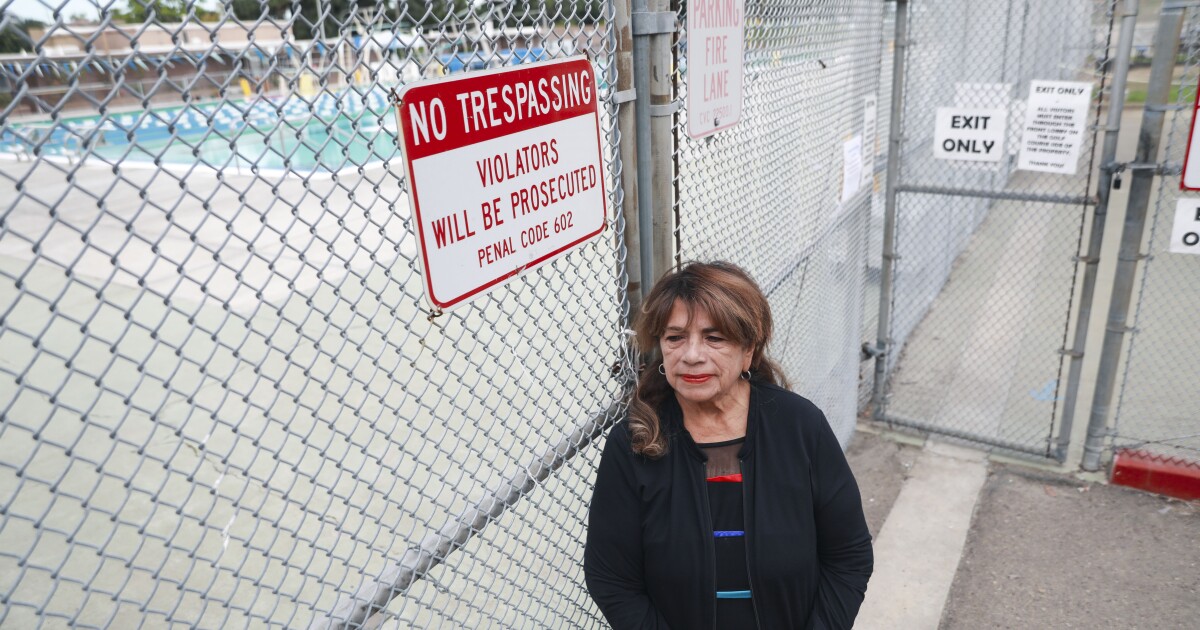 Gloria Salas said she was disappointed, but not surprised when National City announced Tuesday that it was temporarily closing the Las Palmas swimming pool. She and others who use the 63-year-old community facility have watched as it has fallen into disrepair over the years.

“This is why I’m still collecting signatures because we won’t stop until we see something done,” said Salas, a National City resident who has been advocating for the city to renovate the pool and bring it “back to its state of pride that it once was.”

It appears their voices are being heard.

City officials, acknowledging the facility’s critical condition, said last week that they will invest millions in state and federal dollars to make emergency repairs. Sens. Toni Atkins and Ben Hueso, whose districts include National City, presented the city with a $2 million check for infrastructure improvements. The funds will go to repair the 1958 pool and its amenities such as the showers, roof and park restrooms.

“We have wanted to do so much for this iconic resource and with these dollars, we can make it happen,” said Mayor Alejandra Sotelo-Solis.

The state money will be pooled with $2.3 million in federal American Rescue Plan Act funds allocated by the City Council to repair the facility. The city is looking to make improvements in three phases: immediate upgrades in the first phase, work on designs for a wellness center in early 2022 and building it in the final phase should the City Council approve the project. The new facility would be multi-level with lockers and activity rooms, according to city staff.

Emergency repairs will cost the city about $2.25 million, including $1.25 million to rehabilitate the deck and $1 million to replaster the pool. It was last replastered in 2007 and “is in immediate need of replacement in order to continue pool operations,” according to a city staff report.

“We’ve been trying to track how much water we’re losing based on the water bills that we get for the pool and we’re estimating about 7,000 gallons per day due to deferred maintenance,” said Public Works Director Roberto Yano. “We’ve been tracking this need for replastering since 2016 and we believe it’s gotten to the critical point.”

For Salas, these emergency repairs are vital for frequent users of the pool like herself.

“The showers are bad, the toilets aren’t even working,” she said. “We have to be careful because there’s a lot of spiders. It’s very, very rough.”

The pool would be closed for up to six months to complete these repairs, according to city staff. It’s worth it, added Salas because the pool is not only used by local seniors but younger generations like her grandchildren and visitors to National City.

After hearing about the funding, Salas said she felt “very excited and hopeful” because many in the community rely on the pool to maintain their physical fitness.

“We discovered that it gives us a better way of living,” added Salas, 75. “We all know that exercise is the best thing but I noticed that exercise, like walking or going to the gym, is not for us anymore. For us, the swimming pool is perfect because we feel free to put our feet up.”

For now, the city expects to reopen Las Palmas pool sometime next week after the reported “mechanical issue.”