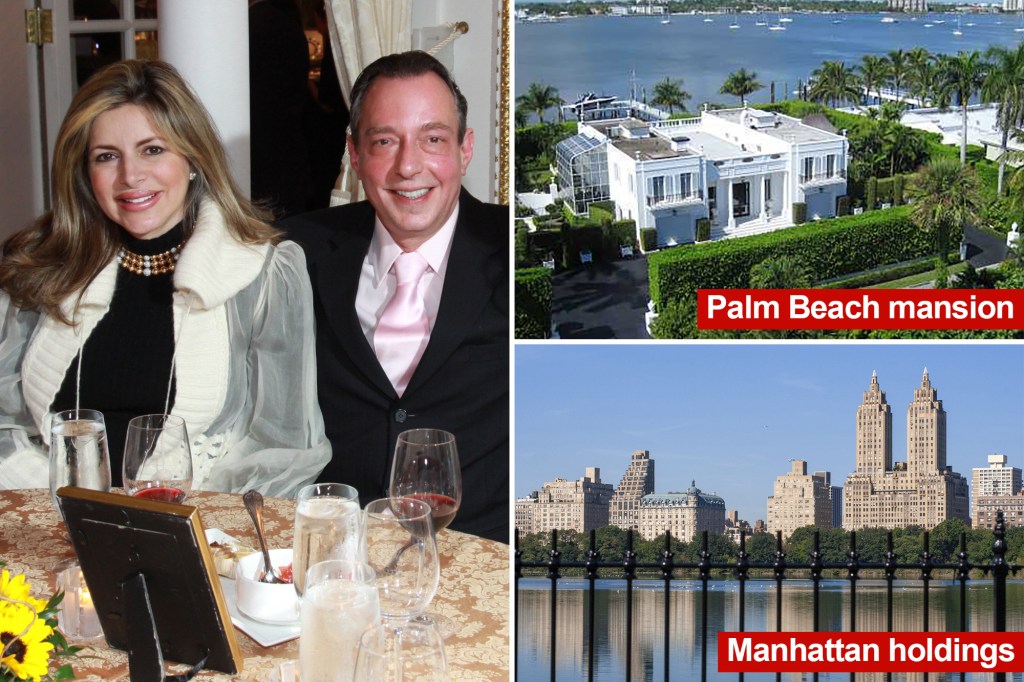 A police call last month over a domestic disturbance in Palm Beach, Fla., is threatening to rock a New York real estate empire controlled by a pair of feuding brothers, The Post has learned.

Around 10 p.m. on Dec. 9, Palm Beach police answered a 911 call from the waterfront estate of 66-year-old Abraham Haruvi, who together with his brother Arthur owns more than 30 buildings housing 500 apartments across New York City, mostly located on Manhattan’s Upper East Side and Upper West Side.

Giovana Stephenson, Abe Haruvi’s wife of 14 years, was standing outside the 9,700-square-foot, Regency-style mansion — boasting a pool, outdoor fountains and its own private boat dock just four blocks from Donald Trump’s Mar-a-Lago Club — awaiting police with the couple’s two children, according to a police report obtained by The Post.

When cops arrived, she showed an officer scratch marks that left “redness” on her chest, claiming her husband “scratched and hit” her during an argument that ensued after she accused him of “hiding something on his phone,” the report said. Haruvi was led outside in handcuffs and charged with misdemeanor battery, according to the report. He was later ordered to move out and cease all contact with his wife, according to a restraining order obtained by The Post.

Now, the incident is poised to make waves in Manhattan, as Haruvi faces an expensive divorce that could finally spell the unraveling of a $200 million, Big Apple real estate empire that has weathered multiple lawsuits between Abe and Arthur Haruvi. Both accused each other of stealing from the business — that their father, Jacob, built — in addition to mismanagement and dereliction, according to court documents.

After the Dec. 9 incident, Stephenson hired Joel Weissman — a high-powered Palm Beach divorce attorney who practices martial arts in his spare time and has been nicknamed “Mad Dog” because of his aggressive courtroom style, according to a Town & Country report. His clients have included billionaire Red Sox owner John Henry and the late New York Yankees partner Jack Satter.

That, in turn, could force Abe Haruvi to sell his stake in the New York real estate portfolio, as “he does not have a lot of cash lying around,” according to a source close to the situation. About 40% of the company’s rentals were vacant during the height of the pandemic, sparking a liquidity crisis that only got resolved after Arthur filed a lawsuit against Abraham in July, forcing him to agree to a debt-refinancing deal, according to sources.

Stephenson declined to comment, but Weissman told The Post that the couple’s prenup agreement could cost Haruvi $8 million plus the Palm Beach mansion, which they bought in 2011 for $7.8 million, as well as other assets. The amount will likely swell with the battery charge, which could trigger a so-called “bad boy” clause in the prenup, Weissman added. State prosecutors filed battery charges against Abe Haruvi on Jan. 22 with a hearing slated for late March. Haruvi has pleaded not guilty, according to his lawyer.

“A divorce will occur,” Weissman said. “From my client’s perspective, the marriage is not salvageable.”

While the Haruvi brothers have kept a low profile despite the size of their holdings, they both came under fire in the late 1990s for allegedly trying to evict rent-stabilized tenants, claiming to need the apartments for themselves or for family members, according to reports at the time. Approximately 35% of their apartments are rent-stabilized.

During the pandemic, their income was slashed and their $53 million mortgage was thrown into default. Arthur had arranged to refinance the mortgage while taking advantage of historically low interest rates, but Abe initially refused to sign the papers “for no other reason but to further a personal vendetta,” according to the complaint filed in July.

Out of exasperation, according to a source, Arthur sued his brother to compel him to sign.

In an earlier 2020 lawsuit, Arthur had accused Abe of skimming money for his personal use from seven buildings owned by Simry Realty Corp., including four contiguous buildings on West 54th Street in Midtown Manhattan. Abe, the suit claimed, had instructed various Simry employees to charge more for their services and gave some bonuses as part of a “nefarious plan” to force Simry into default so that Abe “will be positioned to purchase the debt from the lender, foreclose on the collateral and usurp total unfettered control of Simry’s assets.”

The complaint was withdrawn as the brothers settled the matter, according to a source with knowledge of the issue. In a brief interview last week, Abe Haruvi said he is currently not in litigation with his brother.

“This is another example of [my family] trying to shame me publicly,” Abe Haruvi told The Post. “However, the truth will come out and I hope you are available to report it at that time.”

The Dec. 9 incident isn’t the first time Abe Haruvi and Giovana Stephenson’s household affairs have spilled into public view. In 2010, just before the couple moved into the manse from a home nearby, a housekeeper sued them, claiming she was forced to work 19 hours a day while she shared living quarters with their dogs.

In addition, Irma Diaz claimed in her suit filed in Florida that she was forced to use a shower where the dogs urinated and defecated, and that Stephenson “regularly pushed, squeezed, shook and slapped” her.

Stephenson, through her lawyer Weissman, declined to comment on Diaz’s allegations.

Abe Haruvi told The Post he was never served with the maid’s lawsuit, dismissing it as a ploy “by an attorney to embarrass me.” The lawsuit was eventually withdrawn.

As for the Dec. 9 incident, he said “the truth will come out” and that he puts his “entire trust in the justice system” to make that happen.

“I’m looking forward to being found innocent of all charges and I await the day that justice is served,” Haruvi told The Post. “I steadfastly hold onto my innocence and it will be proven.”