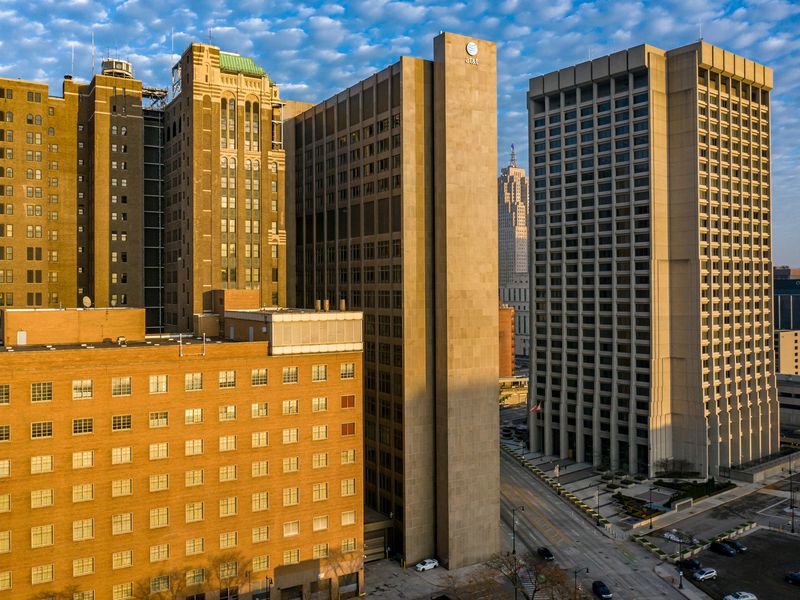 It’s one of several AT&T properties the company has purchased recently, including in Milwaukee ($30.1 million), Pittsburgh ($25.7 million) and Winston-Salem (also $15.5 million).

Public records do not yet reflect a sale. An email was sent to Reign Capital late Thursday afternoon seeking comment and additional information, and a voicemail was left Friday morning.

“We remain committed to Detroit, and this change in building ownership will not affect our employees or operations,” Brandy Bell-Truskey, an AT&T spokesperson, said in an emailed statement Friday afternoon.

The purchase price amounts to just over $28 per square foot for the approximately 551,500 square feet.

Anthony Sanna, executive director in the Birmingham office of Integra Realty Resources, an appraisal firm, said the low purchase price is likely reflective of “uncertainty in the office market” and the hefty cost of “trying to absorb a half million square feet and reposition” the building.

Of that, 91,900 is building mechanical systems making the total office space of approximately 461,000 square feet. AT&T, according to earlier marketing materials, was to retain about 57,000 square feet. The remainder of the building, constructed in 1972, is vacant.

At 444 Michigan Ave., it is across from the Patrick V. McNamara Federal Building and across Cass Avenue from the Rosa Parks Transit Center.

It’s been nearly six years since the high-rise first hit the market.

The purchasing entity, Reign CO1 Propco LLC, lists Ryan Klenovich as its manager in its Michigan incorporate documents, which were filed with the state May 26.

Klenovich, described in media reports as a former executive with New York City-based investment firm Angelo Gordon & Co., was tied to a Chicago deal in 2018 with Kushner Cos., the real estate company of Jared Kushner, former president Donald Trump’s son-in-law.

In that 2018 deal, Angelo Gordon, Chicago-based AJ Capital Partners and Klenovich were to buy the Kushner-owned 225 W. Randolph high-rise in the city’s Loop, Crain’s Chicago Business, sister publication of Crain’s Detroit Business, reported at the time.

A 2017 refinancing deal for that property came under fire when the New York Times reported in February 2018 that Kusher, at the time a senior Trump adviser, held meetings with private equity firm Apollo Global Management’s founder in the White House prior to Apollo granting Kushner Cos. a $184 million refinancing loan that paid off a $132 million loan financing Kushner’s $276 million purchase of the building in 2007.