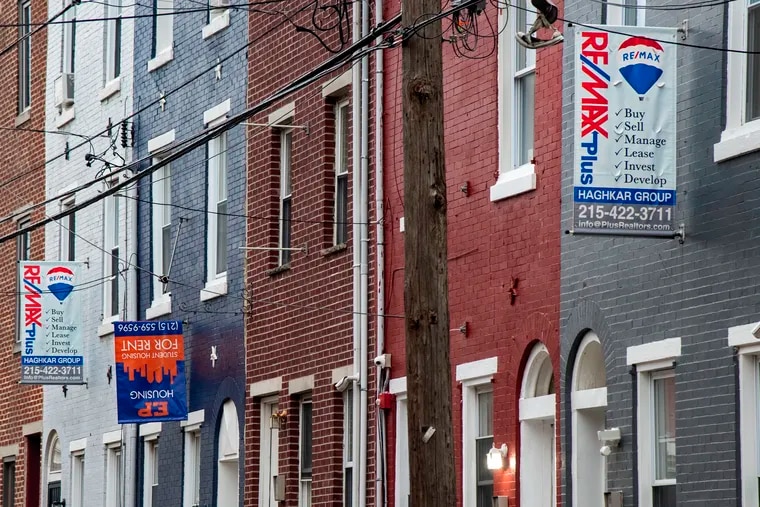 Greg Wertman wasn’t surprised last week when a Philadelphia landlord shared a realization he’d had about his business. As president of HAPCO Philadelphia, the city’s largest landlord association, Wertman has heard it frequently over the last two years: “I need to get out.”

One in five landlords listed a property for sale in Philadelphia during the pandemic, according to a survey by researchers at the University of Pennsylvania’s Housing Initiative at Penn, the Joint Center for Housing Studies of Harvard University, and the Bloomberg Harvard City Leadership Initiative.

And as tenants have struggled with loss of income during the pandemic and paid less rent, more landlords are putting off property repairs.

These actions threaten the city’s already inadequate supply of affordable housing. That’s a concern shared by HAPCO Philadelphia, housing advocates, and the report’s researchers, who said housing stock needs more investment, and landlords are among those who need more support. Many landlords faced challenges before the pandemic that only got worse.

The nearly 21% of Philadelphia landlords who listed properties for sale in 2020 is a steep increase from 3.5% in 2019, according to the report released last month. Across the 10 cities included in the researchers’ survey, the share of landlords listing properties rose less starkly — to 13% from 3% in 2019.

Landlords who collected less revenue in 2020 were much more likely to take the drastic step of listing their properties for sale. Although the survey did not ask landlords to explain their decision, researchers speculated that the property owners could be pessimistic about the future of the rental market, have lost too much money to continue, or their units have fallen too deeply into disrepair from deferred maintenance. The sharp rise in house prices during the pandemic’s strong seller’s market gives owners an incentive to sell.

» READ MORE: Fierce competition for homes in the Philly area (from March)

“We’re concerned about the affordable housing stock,” said the report’s coauthor Elijah de la Campa, a senior research associate with Bloomberg Harvard City Leadership Initiative and a research affiliate for the Joint Center for Housing Studies. “How do we make sure there are affordable, safe, healthy homes for people to live in given all the things we’re seeing?”

Across the 10 cities, property sale listings were up for all landlords. Sales among small landlords are of particular concern in cities such as Philadelphia where a large share of landlords fall into that category, and many tenants rely on those property owners for homes they can afford.

Wertman, whose organization of roughly 2,000 members represents many of the city’s smaller landlords, said some property owners are taking their money and investing it elsewhere “because they’re fed up.”

» READ MORE: More than 45,000 Philly tenants have requested help with rent. The city can help less than half.

Rental assistance is running out, he said, and Philadelphia needs more federal funds to help tenants and the landlords that have housed them.

“What was asked of landlords, the government should have been stepping up and doing, and they didn’t and it’s a shame,” he said. “This is almost two years now. Some [landlords] can’t last that long.”

Vincent Reina, a coauthor of the report and associate professor and faculty director of the Housing Initiative at Penn, said the report’s findings emphasize “the strain with which a lot of our housing stock is consistently under.”

If landlords go through with selling their properties, he said, “this does show a real potential opportunity for government to think about how to engage landlords and to facilitate purchases of the properties” to keep units affordable and invest in the many units that need it.

In Philadelphia and across the 10 surveyed cities, about 5% of landlords delayed property repairs in 2019. That share rose to more than 35% in Philadelphia and 31% across the other cities in 2020 — a rise landlords attributed to the pandemic. Over time, delayed maintenance can make a home uninhabitable, removing properties as options for rental housing.

Wertman said that the extent of deferred maintenance in the city surprised him but that it is a direct result of landlords being unable to collect rent.

“We heard it from the beginning. They were upset that they were still required to keep things maintained and fixed up when they weren’t getting any income,” Wertman said. “Mom-and-pops don’t have a big margin here. Not like the big boys.”

He said landlords have to weigh whether they have the money to fix leaky faucets or a wall that needs patching while being prepared to pay for necessities, such as a refrigerator replacement.

Small landlords (1 to 5 units) and midsize landlords (6 to 19 units) have fared worse in collecting rent than landlords with 20 or more units. One in 10 small landlords collected half their rent or less, a “sobering” statistic, de la Campa said.

“We know by now that they house the nation’s most vulnerable renters,” he said.

Small landlords were most likely to house tenants who were deeply behind on rent before the pandemic. The owners are more likely to be people of color and to earn lower incomes.

The pandemic itself, and not just lost rent, changed how landlords operated in 2020. Causes included decreased demand for rental housing, pandemic policies such as eviction bans, and difficulties getting supplies for maintenance and repairs, researchers found.

In 2020, roughly one in five landlords forgave a portion of back rent or lowered monthly rent — uncommon steps before the pandemic.

The share of landlords charging late fees and increasing monthly rent — the two most common actions before the pandemic — fell in 2020. Many cities, including Philadelphia, banned late fees on back rent. And tenants’ inability to pay and decreases in renter demand reduced the viability of rent increases.

Compared with 2019, more landlords in 2020 entered into rental payment plans with tenants. In Philadelphia, landlords are required by court order to mediate with their tenants through the Eviction Diversion Program before filing for eviction. Renter protections City Council passed last year included access to rent repayment plans.

The share of landlords who started eviction proceedings against at least one of their tenants — about 15% — stayed the same in 2019 and 2020 even though landlords collected less rent. That’s due at least in part to eviction bans. Despite these bans, landlords evicted an estimated 1.1 million renters nationwide in 2020, according to the Eviction Lab at Princeton University.

Collecting rent was more difficult for properties in communities with lower incomes and with majority people of color, who have disproportionately borne the brunt of the health and economic crises during the pandemic. Renters in neighborhoods with higher shares of people of color were more likely to face late fees and evictions. Landlords were less likely to forgive back rent.

“Even in this context of nonpayment and late payment,” Reina said, “there still is a racialized difference in response from property owners, and that is punitive to renters of color and just highlights the multiple dimensions through which renters of color are negatively impacted by the pandemic.”