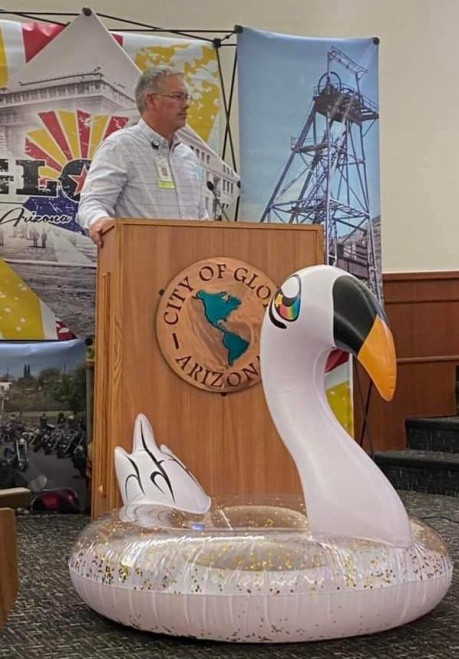 With a new partner on board for its Community Center swimming pool rehabilitation project, the City of Globe is envisioning the possibility of a bigger and better pool area than originally planned.

At a special City Council meeting last Tuesday, it was announced that Cobre Valley Regional Medical Center has joined in on the project, extending the city a $1.5 million partnership offer. “Our board is very excited to be able to partner with you to bring something amazing to the community,” said hospital CEO Neal Jensen. “By working together we can get a better project.”

“With the Globe City Council’s prior commitment to the rehabilitation of the Community Center Pool, and now with Cobre Valley Regional Medical Center coming onboard we are able to provide our region with an exceptional aquatic facility,” the City stated on its Facebook page.

With this new backing, the council voted to approve a modified design contract that includes a number of proposed additional improvements on top of the pool rehabilitation, zero entry and other features – including a new building, a roofed community room, an expanded splash pad, a grass area, a large water slide and a children’s water slide. “We’ve taken design ideas with cost and flexibility in mind,” said architect David Balian, who presented the council with conceptual design drawings. Balian added that the design was “a work in progress.” The proposed new building features a concession stand, kitchen, first aid center and storage area. The existing building would be kept with a redone interior, divided into men’s and women’s areas, and the entrance would be redone as well. Balian said the roofed community room could be either open or enclosed, depending on budget, and that central lifeguard stands will cover both the pool and splash pad areas.

The proposed additions will push back the pool’s projected opening from May 15, 2022 to July 15, 2022, but councilmembers felt this would be worth the wait – “a chance to make the project look great the first time out,” said Councilmember Mariano Gonzalez – and would avoid the prospect of opening the pool while construction continued around it. “We believe if we can push the date to July 15, that will allow design and construction of most of what you see here,” said City Manager Paul Jepson.

“Our community and our region will benefit for decades,” said Jensen.

Vice Mayor Mike Stapleton hailed the design proposal as “a fantastic idea . . . I love all the changes.” Councilmember Jesse Leetham called it “a big win.”

Jepson said it was too early to know the new additions’ impacts on the project’s cost, currently around $2.3 million, but that change orders were expected. At his suggestion, the final motion to approve the contract modifications included a stipulation authorizing him to enter into a Memorandum of Understanding with CVRMC to address any change orders.