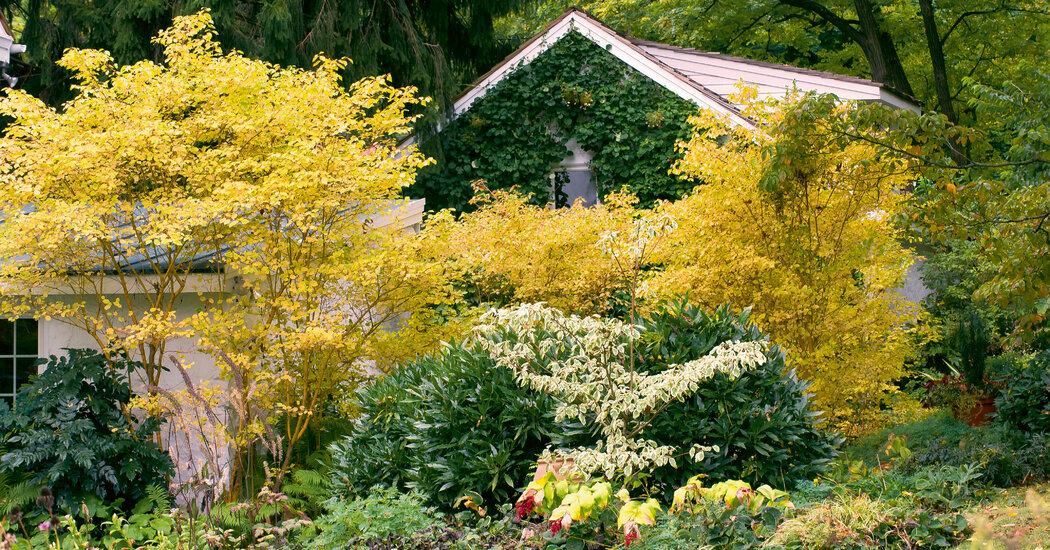 For David L. Culp, the walk is a daily practice, not for its exercise value, but in pursuit of insight. The familiar route he has taken most days, over some 30 growing seasons, is around his two-acre garden in Downingtown, Pa., along the paths he created.

He walks the sloping site in search of ideas for possible refinements, bringing to life the opposite of what he calls a “big-bang garden,” the kind with just one riotous spring or summer moment.

Fall walks are especially precious, said Mr. Culp, a longtime garden designer, instructor and author. Try to catch the garden before its visual cues degrade, leaving us vulnerable to the tough combination of winter’s deprivation and that pile of tempting catalogs arriving at our low point.

Right now: Go out, look around and listen.

“Read your garden, and also let it speak to you,” advised Mr. Culp, who spent two decades teaching thousands of students at nearby Longwood Gardens, until pandemic restrictions intervened. He now teaches virtually, in popular monthly webinars sponsored by Garden Design magazine. (The next will be held on Nov. 11.)

Mr. Culp believes that the best design decisions result from responding to what the garden tells us, not from inventing some new feature to impose upon it or from impulse-buying.

So out he goes, notebook, pen and camera phone in hand, perhaps sporting his favorite “Born to Raise Hellebores” T-shirt, which reflects his horticultural humor and is one among many plant-collecting obsessions.

Some of what he jots down you might expect: a list of what didn’t go so well, or plants that didn’t make the grade, or an area he neglected that will require reworking. “Get that early spring planning on the radar now,” he said.

Mr. Culp might notice a tall, fall-blooming aster or Joe Pye weed (Eutrochium purpureum) that flopped, reminding him that Sedum Autumn Joy or tall garden phlox (Phlox paniculata) had splayed open at their earlier bloom times, too. His note to self on pruning them: “Chelsea Chop.”

Plants so designated will be cut back by a third to a half late next May or early in June. (The technique’s name was coined because its timing coincides with the Royal Horticultural Society’s Chelsea Flower Show, in England.) This will delay bloom time slightly, but promote shorter, sturdier stems.

Also noted: Which plants really worked? “Plant more of those; you work with what worked,” he said. It’s an obvious takeaway, he acknowledged, but one that we often fail to act on if it isn’t duly recorded, and corresponding plant orders placed.

But most of what he looks for is subtler, requiring a practiced eye — opportunities to enrich the fall garden, for example, by building it around a dominant leaf color borrowed from the changing canopy trees. Adding Amsonia to the perennial layer, with its late-season yellow foliage, could provide a link to the changing color of the Princeton Sentry Ginkgo trees above, an all-male cultivar selected for its narrow, conical crowns and lack of nasty-smelling fruit.

Mr. Culp’s quest for insights isn’t sated by basic observations — of the Rudbeckia Herbstsonne that fell over or the lusty Japanese anemone (Anemone tomentosa Robustissima) that’s hogging too much ground and needs reining in. His way of seeing is a layered one, and was the subject of his 2012 book, “The Layered Garden: Design Lessons for Year-Round Beauty From Brandywine Cottage.”

It’s not just the landscape’s canopy, shrub-zone and ground-covering layers that he takes in. He observes every plant’s color, texture and shape as distinct layers that can contribute to the success of a design.

Individual garden beds represent another layer in the larger composition. Time is a layer, too — although processing that could take some mental gymnastics. Peel back the current scene to recall moments gone by and imagine what is to come. As if to remind himself, and the rest of us, of all 365 days of potential, Mr. Culp published a follow-up book last year, “A Year at Brandywine Cottage: Six Seasons of Beauty, Bounty and Blooms.”

Consider a Collection (or Many)

“I used to have everything happen early in my garden,” Mr. Culp said. “But I gradually stretched it.”

One tactic for getting there satisfied another of his inclinations: the more-is-better drive to amass plant collections.

“If there is something that you love, do a little exploration of that genus,” he said, “and extend the bloom time of that favorite plant.”

The garden will be better for it, but caveat emptor: You may get hooked.

Now he has Narcissus galore, and no mere iris moment, but more than three months of moments, from the first little I. danfordiae blooming in late March to the I. ensata types that flower at the far end, in June.

Mr. Culp is also a galanthophile, happy companion to more than 200 named cultivars of snowdrops (Galanthus) that bloom in fall, late winter or very early spring. What began with a clump of the familiar giant snowdrop (G. elwesii) now includes a couple thousand of them naturalized in a meadow area, inspired by the way his homework on the genus revealed that they grow in the high mountains of their Balkan homeland. His passion has not cooled; another 700 await planting this fall.

“I’m just a man in love,” he said. A bonus of that romance: Snowdrops are deer-resistant, and his garden is not fenced.

Start modestly, though, especially with bulbs. “A lot of times I try a small number of something new, and if it works in a test, then I’m down for 50,” he said. “Before I go steady, I have to know.”

Whatever the number, he lays out the bulbs in groups, with a few trailing off outside the main clump, to make it appear as if they have already started to naturalize themselves. (A same-but-different trick to simulate nature’s planting style with perennials like Joe Pye weed: Combine cultivars of various heights and colors within a border or meadow, he suggested, as if they had self-sowed and revealed their natural genetic variation.)

And then there are those hellebores, of which he has bred his own lineage, trademarked as the Brandywine Hybrids, emphasizing a range of colors, flower shapes and garden vigor. They provide evergreen ground cover until Mr. Culp starts cutting off the foliage in January and February, just before the new year’s flowers emerge.

Mr. Culp also has a collection of containers — 200 at last count — that he stages in various areas, little potted worlds within the garden. Could your place benefit from such charming vignettes (and should you maybe invest in some nice containers at current end-of-season garden-center sales)?

There is not just craving but method to this garden designer’s acquisitiveness, as collections of any kind can bring coherence.

“You can collect not just more species and varieties of one genus,” he said, “but more of the layers that plants can bring — more of one color, one texture or a shape. All of those speak to the repetition that lends more unity to the garden.”

A collection of vertical elements creates the signature shape of his garden, which includes an acre of woodland. It was the trunks of all those trees that inspired Mr. Culp to add verticality on the lower and intermediate levels.

That verticality comes from a lot of what he calls “strappy plants” that he uses lavishly, including bear’s breeches (Acanthus), foxglove (Digitalis) and tall alliums, as well as non-hardy things like red-leaf Abyssinian banana (Ensete ventricosum).

“Even the foliage of a German iris is a vertical element,” he said, as are pots of tender Phormium. “You might not see it unless I pointed it out, but they’re there, providing repetition and excitement.”

Picking up on what the trees were saying, his choice for enclosing the Veg — a garden within the garden, of mostly edible things — was the decidedly vertical element of white picket fencing. Elsewhere there are exclamation points from ornamental staking, tuteurs supporting vines and pillars of climbing roses, all playing off what the garden told him.

“I even capped a broken tree and used it as a pillar to support a Schizophragma vine,” he said.

A Winter Garden, One Small Moment at a Time

Decades in, Mr. Culp continues to move about the place he knows better than anywhere, one that somehow still manages to surprise him and keep nudging him forward. The walks are his ongoing education in design, with the garden as curriculum and instructor.

These fall days, he is seeking backdrops for moments-in-the-making for winter, a season too often overlooked. A stone wall could provide a foil for late-winter bulbs or hellebores; the patterned bark of a Stewartia trunk or the red-twig dogwood’s colorful, leafless stems are other opportunities he has discovered.

“Build from your strengths in wintertime,” he said. “Ask, ‘What’s my strongest element then?’ and build from that. As in every season, in every layer, flesh out the pictures.”

Margaret Roach is the creator of the website and podcast A Way to Garden, and a book of the same name.