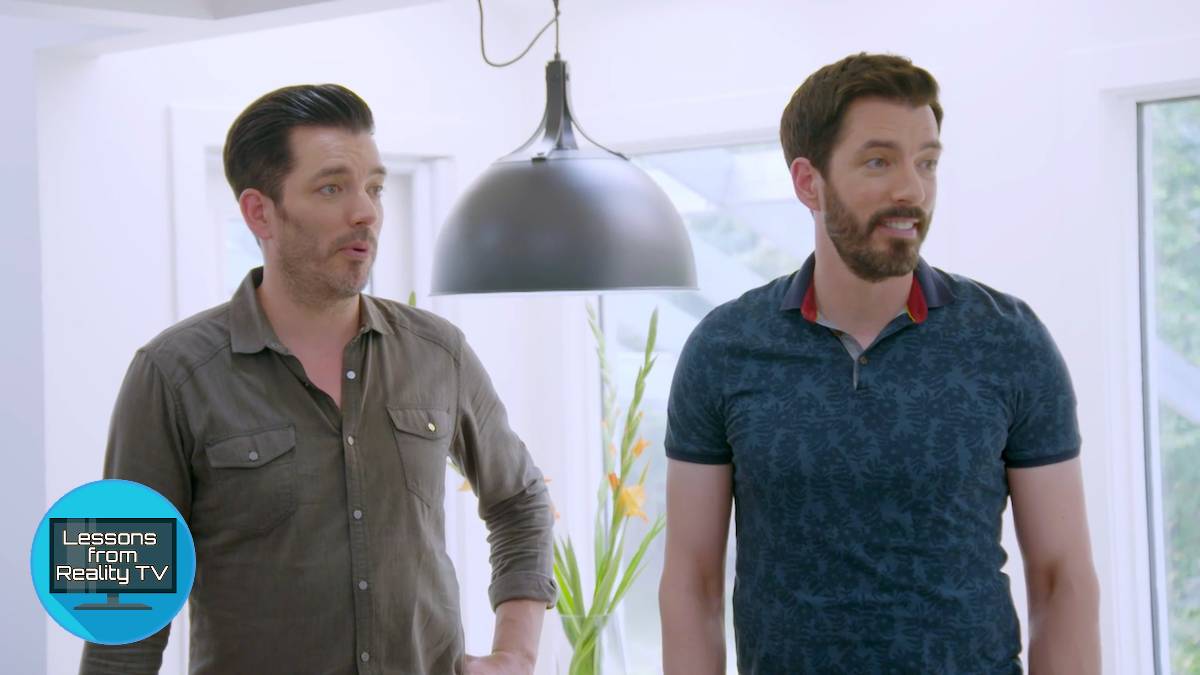 Drew and Jonathan Scott are no strangers to outdated homes, but the latest house on “Property Brothers: Forever Home” is a real doozy.

In the Season 6 episode “Out of the Time Warp,” Drew and Jonathan meet Derek and Krista, a Calgary, Alberta, couple with a home stuck in the ’80s. With dated oak in every room and a tile counter Jonathan says looks like a retro video game, this home is due for a serious upgrade. Plus with three kids and a large extended family (Krista has 11 siblings), the couple need to open up their layout and create more entertaining space.

Armed with a hefty $200,000 renovation budget, the Scott brothers give this home a massive update that the family will surely love for decades. Find out which features scream ’80s and absolutely must be fixed, with plenty of smart lessons you might be glad to implement in your own home.

Painting an outdated staircase can save a fortune

Derek and Krista’s home is filled with passe features, including a grand staircase covered in turned wood and dated oak. While plenty of designers would say to replace the balusters, the brothers know that the railing can be salvaged.

“A lot of work had been put into all the woodwork here, but it just was a dated color,” Jonathan says.

The brothers paint the staircase white and blue-gray, which immediately update the entry, and save some money in the process.

“The staircase has now been completely transformed,” Jonathan says afterward. “The yellow oak is gone, and the whole area is now bright and welcoming.”

While the brothers decide to replace the other oak features in this home, this painted staircase proves that not every retro feature needs to go.

In the living room, Drew and Jonathan makes big changes, removing the wall that separates the living area from the kitchen and raising the floor so there isn’t a step down. While these structural changes make a big difference to the function of the layout, the Scott brothers know that changing the bulky built-in storage will really update the space.

“Derek and Krista loved the idea of their built-ins before,” Jonathan says. “But they didn’t love the dated aesthetic.”

With light wood tones, understated open shelving, and simple cabinets down below, the custom built-ins are pricey, costing $17,000, but the look is well worth the investment.

“These custom-made floating shelves rocket these built-ins into this century,” Jonathan says.

Save money on a fireplace makeover

Derek and Krista want to keep their living room fireplace, but with plans to update the cabinetry, Drew and Jonathan know they’ll need to give this feature a fresh look, too. They choose an elegant white marble to replace the brick, and decide to save money by using the marble only around the fireplace, rather than taking it all the way to the ceiling.

In the end, Drew and Jonathan love the simple yet elegant fireplace design.

With the wall between the kitchen and living room gone, Drew and Jonathan want to make sure the two spaces flow together.

“The kitchen and how it connects to this family room are the most important part of this design,” Jonathan says.

The Scott brothers remove the oak cabinets and install two-tone cabinetry: white for the perimeter and black for the island.

“We have breathed a whole new life into this kitchen,” Jonathan says. “The cabinets are stunning; I love the two-tone aesthetic. It’s going to be beautiful and sophisticated.”

Once again, Jonathan and Drew know it makes sense to remove the oak and replace it with something new. The custom cabinets may be an investment at $25,000, but they transform the space and help the living room and kitchen flow together.

Tile counters are tricky to clean

When Drew and Jonathan first see the tiny tile on the countertops, they’re surprised to see blue and pink tiles among the white.

Still, the Tetris design isn’t the worst part of this counter—Krista and Derek say it’s difficult to clean the grout lines. They explain that their son works hard to wipe down the island.

“He has a dedicated toothbrush that he has to use to get the grout clean,” Derek says.

Drew and Jonathan replace the old tile with quartz slabs, white on the perimeter and gray on the island.

“We replaced that with a much more sleek, low-maintenance quartz, which is way more practical and a whole lot easier on the eyes,” Jonathan says when the work is done.

The new counters are pricey at $4,900, but with simpler colors and no grout lines, the brothers improve the look of the kitchen—and save Derek and Krista’s son a ton of cleanup time.