Take the omnipresent open floor plan. It seemed like a terrific and forward-looking idea—at least until everyone had to work or go to school in one room. And as many of us learned, while a once-popular chalkboard wall may be helpful for remote learning or for children to express their creativity, it can quickly turn into a dusty and unattractive mess.

That’s why the data team at Realtor.com® decided to take a look at which design trends are skyrocketing right now, based on Google search trends—and which ones are going the way of the shag carpet. What we learned is, it’s less about what “Fixer Upper” stars Chip and Joanna Gaines are doing these days and more about what’s most conducive to a homeowner’s lifestyle.

Designers say clients are prioritizing comfort and functionality over trendiness, especially since the pandemic forced them to be faced with their design decisions daily.

The pandemic created “a strong need for multifunctional spaces and multifunctional pieces of furniture,” says designer Lanna Ali-Hassan, co-owner of Beyond the Box Interiors, a design firm in Washington, DC. Recently her clients have been looking to incorporate more maintenance-free design elements. (So no more all-white living rooms or formal dining rooms.)

“People want to be more comfortable, more relaxed, more like a vacation-at-your-home type of vibe,” she says.

So what’s in and what’s out? This is what the search stats—and a select group of interior designers—had to say.

What’s old is new again, and this midcentury mainstay, which had fallen out of favor, has made a big comeback.

Terrazzo floors are ubiquitous in public schools, hospitals, airports, and other high-traffic buildings. The speckled flooring was also very popular in custom homes from the 1950s and 1960s but fell out of fashion in the 1970s.

Now, one of its main draws is that it’s environmentally friendly as it can be made with recycled materials. Terrazzo is made of crushed glass, stone fragments, or other organic materials embedded in concrete or resin. Then it’s polished until smooth.

But terrazzo isn’t cheap—depending on the materials and complexity of the design, it can cost more than granite or marble. Terrazzo floors can range from $25 to $90 per square foot, according to the home improvement website Home Advisor.

Still, the material has grown in popularity thanks to its extreme durability, and designers have gone beyond the floor and are experimenting with terrazzo furniture, bathroom walls, and countertops.

“It’s tough as nails,” says Justin Riordan, founder of the Spade and Archer Design Agency, a home staging company with locations in Portland, OR; Seattle; and Los Angeles. “You put it down once, wax it once a year and it lasts for freaking ever.”

Hardly anyone had ever even heard of shiplap before Chip and Joanna Gaines used it in seemingly every home renovation on their HGTV design show phenomenon, “Fixer Upper,” starting in 2014.

Despite its name, shiplap wasn’t used for ships—the horizontal interlocking wood boards were initially used for sheds and barns as cheap weatherproofing. Today, designers are using it to cover interior walls as an economical way to create a rustic-chic, farm-style vibe.

After skyrocketing in popularity, the trend appears to have peaked last year. While shiplap adds texture to walls and a clean backdrop in a room, it’s become overused. It’s also a pain to rip out, leading some critics to call it the modern-day version of tacky wood paneling.

Joanna Gaines “is one of my favorite people on Earth, but it’s over, done,” says Kayla Goldstein, owner of Kayla LLC, an interior design firm in Pomona, NY.

Instead, she says shiplap should be used sparingly and in small spaces, like behind the TV or just over the fireplace. Painting shiplap a dark color (like charcoal or navy) is also a good way to give this trend an update.

Rose gold enjoyed a moment a few years back, but it appeared to have reached its expiration date.

Initially used as a subtle way to add pops of color in kitchens, bathrooms, and light fixtures, the pink-hued metal quickly became overdone.

Rose gold’s popularity coincided with the rise of Millennial Pink, and with the shade used just about everywhere (including iPhone and iPad devices), blush tones no longer felt special.

While rose gold still has its fans, designers nowadays are looking to implement mixed metals, meaning using two or three different types instead of having everything be matchy-matchy. Classic metals like silver are making a comeback, as are brass and gold elements, though thankfully not as loudly as they were in the 1980s, when the motto was “more is more.”

“Gold and silver are continually trading places as the popular finish of choice,” says interior designer Stephanie Purcell, founder of Redesigned Classics, an interior design company based in Atlanta. “As for the more pinkish hue, it definitely has a shorter shelf life. It is not a typical color and, while it seems fun and fresh now, will look dated in years to come.”

Chalkboard paint became all the rage in the early 2010s. Initially, it seemed like an innocuous design trend. Who didn’t want a designated space to write down grocery lists, menus, or a simple to-do list? Chalkboard walls can be useful in dens, offices, and kids rooms.

But to be honest, chalkboard paint has proven to be more hassle than it’s worth.

First of all, it’s a pain to apply. It needs to be painted onto a smooth surface, unlike regular paint that can go onto just about anything with minimal prep. That means scraping or sanding before slapping on the first coat. Chalkboard paint also needs lots of time to dry, ranging from several hours to days between coats.

Then, the paint needs three days to dry before chalk can be applied. Oh, and be sure to use the right chalk. Extra-hard chalk and chalk markers are no-nos. To avoid smears and smudges, soft chalk (like Crayola or the kind used in schools) should be used.

A less headache-inducing option is whiteboard wallpaper, designer Goldstein says, so kids can draw on the walls without creating a mess.

Wallpaper is back in style in a big way—but decidedly not the kind that once plastered every surface at Grandma’s house. Bold designs can easily transform large rooms by creating an accent wall or add personality to a smaller space like a bathroom or laundry room.

Designer Ali-Hassan says she loves implementing wallpaper into her designs but admits she probably wouldn’t have said that five to 10 years ago.

“Wallpaper spans every aesthetic, from geometric to glitzy to textured,” Ali-Hassan says. “There are so many different kinds, and there’s a place you could find to put it in every room appropriately.”

Thanks to some technological advances since the 1970s, temporary wallpaper has made this trend much more attainable, especially for those looking for a quick project. (The most time-intensive part is prepping the panels beforehand.) It’s also perfect for renters who don’t want to mess up their walls.

Keep in mind, though, not all painted surfaces are created equal. It’s better to use temporary wallpaper on satin or semigloss paint because the adhesive could damage flat, matte finishes. And those who wallpaper their bathrooms should be sure to use wipeable vinyl. Moisture can cause certain kinds of wallpaper to peel and blister.

Another design trend made popular by ubiquitous HGTV design shows, concrete countertops are versatile, durable, and relatively inexpensive. Concrete may give off a modern, industrial vibe, but it can also complement softer farmhouse-chic styles.

But while it may look cool, fewer people are embracing it as the perfect countertop material. First, it needs to be applied by an expert. Concrete can crack if poured incorrectly by a novice DIYer. Other cons: It’s heavy, takes a long time to dry (at least a few weeks), and is absorbent—meaning it can stain easily if not properly sealed.

It’s also permanent, so homeowners should really be committed to this trend before the first pour.

“The good thing is it’s there forever,” says interior designer Nancy Fire, co-founder of Nancy Fire Designs and Design Works International in New York City. “The bad thing is … you have to take a jackhammer to it to get rid of it.”

For a less destructive option, some quartz countertops are designed to mimic the look and feel of concrete without the downsides. 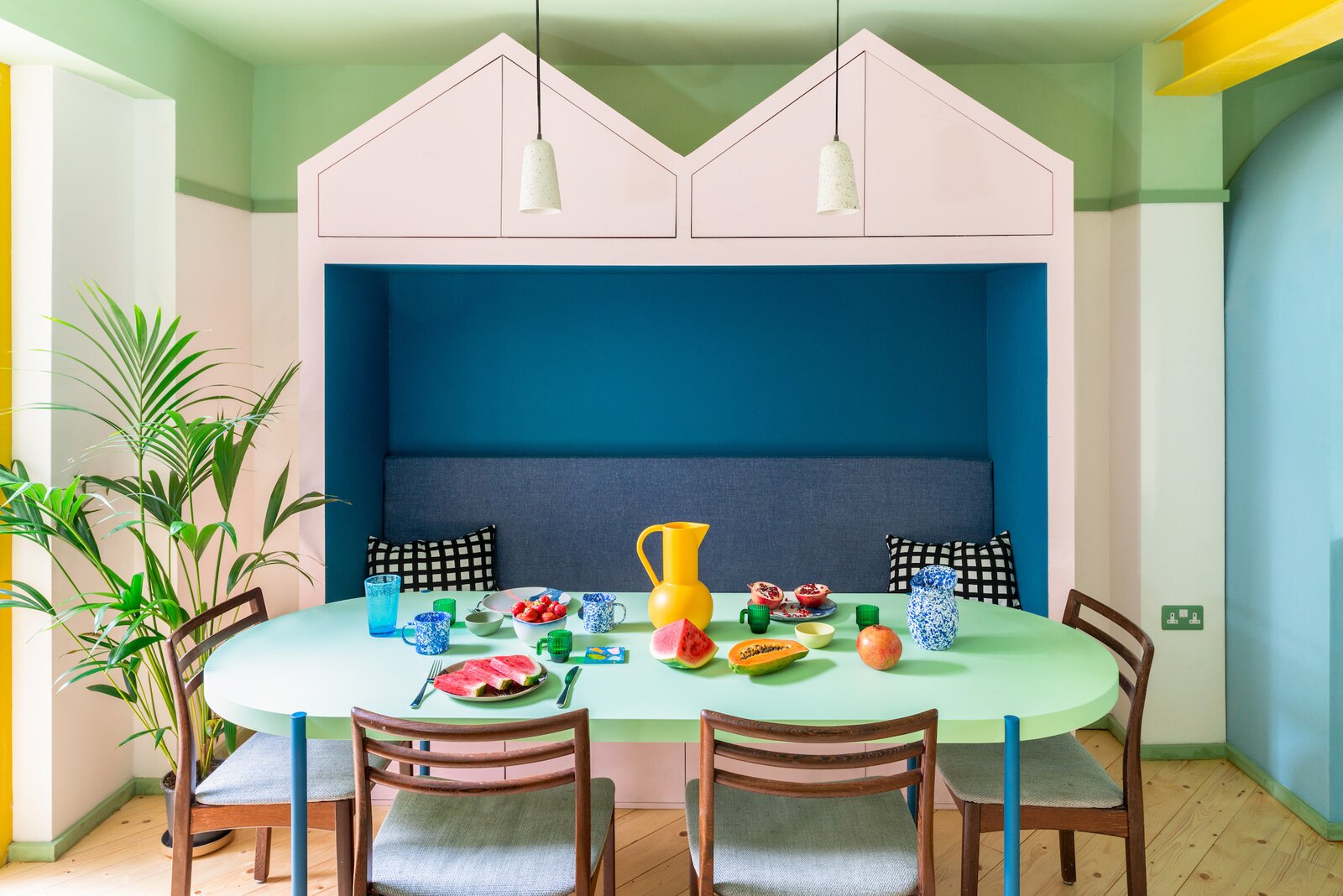