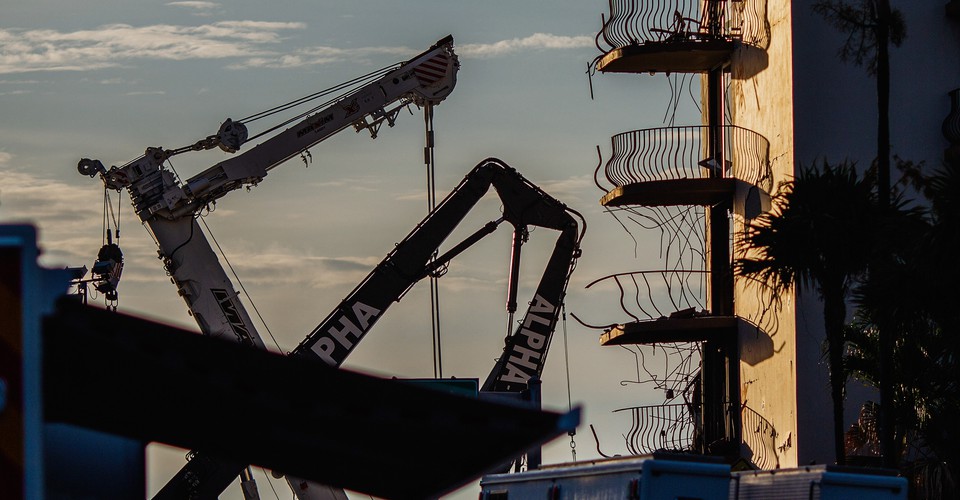 After most of a condominium tower in Surfside, Florida, collapsed last week, the second-guessing began almost immediately. Some residents accused the building’s condominium association of acting too slowly to address known structural flaws identified in a 2018 engineering report. Recent news stories have emphasized dissension among the owners. As someone who studies condos—their history, architecture, politics, and social dynamics, in Florida and all over the United States—I, too, have been wondering whether the building’s divided ownership contributed to the June 24 catastrophe, which killed at least 18 people and left more than 140 missing. Could a single landlord have responded better to engineers’ and occupants’ concerns than an association of 136 homeowners?

Condos have long been big business and a way of life in southeast Florida, which by the 1970s had become America’s center of condo living. Today roughly one in five homeowners in U.S. cities and suburbs lives in a multifamily complex rather than a single-family house, according to U.S. census figures; in Miami and Fort Lauderdale, that share rises to one in three. Surfside residents described Champlain Towers South as a genuine community: “There was a beautiful mixture of cultures and people in that building,” one local told The Wall Street Journal. “People from South America, Cuban Jews, American Jews, American nationals.”

In most ways, the tower in Surfside was no different from Florida’s thousands of other high-rise condo buildings. Those, meanwhile, face many of the same risks—most notably their proximity to the ocean during a time of sea-level rise—as single-owner apartment buildings and other concrete-and-steel properties along the Florida coast. A number of reports suggest that the Champlain Towers South Condominium Association functioned properly and had moved methodically, albeit amid considerable resistance, to figure out how to fix the problems that an engineer had identified.

Investigators still have much to learn about the causes of the disaster. The vagaries of the condo format, including the need to raise $15 million for repairs through a “special assessment” on the owners, might conceivably have slowed the building’s response to structural problems. Absentee ownership, common in many condo buildings, especially in resorts and cosmopolitan business centers, might have hindered repairs further.

And yet the collapse might also have been caused by other, yet-to-be-identified factors that didn’t turn up in the 2018 engineer’s report. “From what I see, [that report] didn’t look like something that I would say, ‘Get the people out,’” Norma Jean Mattei, a University of New Orleans engineering professor, told The Washington Post. “The deterioration played a part, but it wasn’t what caused this failure. Something else had to push this building over the top.” In other words, Champlain Towers South might have suffered not from bad ownership or bad governance but from bad circumstances and bad luck.

Because of the disaster in Surfside, long-standing questions about condo-mania in Florida and elsewhere are resurfacing. The condo, like other forms of co-owned housing such as the co-op, occupies an ambiguous place in American life. Most American homebuyers have historically preferred single-family houses and understood other kinds of dwellings to be second-best. Geographers, sociologists, anthropologists, and political scientists have argued for decades that the condo system is fundamentally unworkable, little more than a scheme cooked up by developers to seduce property buyers with good locations, luxury amenities, and hollow promises of community. Others saw condominium arrangements as an inevitable fiasco, worrying that an amateur group of owners couldn’t possibly run a building competently.

Still, the individually owned apartment emerged in the 19th century in cities such as New York and Washington, D.C., for those who could afford a house but didn’t need or want one—with careful efforts in design and marketing to distinguish them from working-class tenements. The originator of the for-sale apartment in the U.S. in the 1880s opted for a simple system: the corporate-title “cooperative,” in which the association holds title to the entire complex and individual ownership is conveyed by perpetual, in many cases $1-a-year, “proprietary” leases. In some respects, this is a superior model. The single title enables associations to more easily take out commercial loans for repairs, while the leases allow them to evict owners who become a liability.

Yet the power of the association, especially to screen resales, made mortgage lenders wary. And in a nation deeply committed to unfettered property ownership, it also limited the appeal of owning an apartment. Starting in the late 1950s, the mortgage industry, anticipating untapped demand, began to promote condominium arrangements in Florida, then nationally. As early as 1921, Congress questioned the entire premise of for-sale apartments, grilling homeowners about its viability. By 1974, an aggrieved owner, also testifying before Congress, asked, “Can a condominium actually work?” More recently, dysfunctional condo politics have been the stuff of TV comedy on shows such as Seinfeld. Since 2009, disputes between owners and homeowner associations have aired on Sunday mornings in South Florida on an AM radio show called “Condo Craze & HOAs,” hosted by the attorney Eric M. Glazer—a Judge Judy for the Condominium Coast.

Behind much of the skepticism of the condo system were tensions between private rights in property and community obligations. Between the 1880s and World War I, co-owned buildings in the United States were mostly sponsored directly by future tenants (foreshadowing the recent wave of baugruppen in Berlin). By the 1920s, though, speculative developers came to dominate. To sell apartments, they learned to emphasize lifestyle, including ease of physical maintenance (“no lawn to mow,” read many an ad), while downplaying responsibilities.

But owning an apartment, like any other property, comes with its own burdens—just ones less tangible than a lawn. No matter the system, ownership turns tenants, ready or not, into landlords: Members of a condominium automatically become co-owners of a corporate entity responsible for common elements. As nearly everyone who has ever owned an apartment in a large building knows, however, rare is the condo owner who’s attuned to this duty, and rarer still is the one who attends association meetings, let alone serves on the board of directors.

Read: The hot new Millennial housing trend is a repeat of the Middle Ages

And yet developers and sales agents recognized this gap early on. While honing their marketing strategies, they began to encourage buildings to hire “professional” management, leaving associations with few direct responsibilities. Governance could still be challenging. In co-ops in New York and D.C., where associations typically screen new buyers (ostensibly for reasons of financial security), battles erupted over whether to allow resales to Jewish people and, later, single women, Black people, and gay men. In more recent decades, residents of condo buildings have feuded over everything from cosmetic upgrades (redecorating lobbies) to the installation of EV charging stations. These disputes hint at why some early critics believed that condos would inevitably result in huge problems, including premature physical decay.

These predictions occasionally proved true—but almost never in the U.S. In America, our faith in a stable and transparent real-estate system supersedes our deep-seated aversion to public oversight of private transactions. As a result, regulation of condominium-like arrangements in this country, even in freewheeling Florida, has been among the most robust in the world, making American condo owners the envy of their counterparts in places as diverse as Australia, China, and Israel.

People around the world following the news from Surfside are now aware of Miami-Dade County’s requirement that buildings undergo recertification by engineers or architects after 40 years. But since the 1970s, Florida has also introduced an array of other regulations to ensure safe, equitable, and relatively efficient governance of co-owned apartments, and other states have followed its lead in many ways.

When developers experimented with locking associations into management contracts at uncompetitive rates (as detailed in John D. MacDonald’s 1977 disaster novel, Condominium), kept down sales prices by retaining ownership of common areas and renting them back to associations (also at inflated rates), or made monthly charges unsustainably low by retaining control over associations until an overwhelming majority of units were sold, the state outlawed these practices. To allow for a more timely and cost-effective resolution of disputes among owners, and between owners and associations, it set up provisions for resolving disputes outside the courts.

None of this guarantees that, when major repairs become necessary, owners will be able to make decisions or raise money quickly. And even if states push associations harder to take the unique pitfalls of condo arrangements into account, owners are still exposed to other risks, including, in some cases, the uncertainties inherent to waterfront living amid climate change. Ultimately, the condo format could turn out to be a factor in the Surfside disaster, but any presumption of guilt now may provide false reassurance to people who have a stake in other forms of real estate—and face the ugly, rare, and sometimes catastrophic surprises that are a possibility in property ownership of every kind.